As a new decade began, the Swinging Sixties became the Swapping Seventies. Well, that is if you believe everything you saw on the big screen.

Britain’s film industry in the early 1970s consisted of the odd James Bond film and two series of witless though gloriously politically incorrect films which used the double entendres as often as Slade used the A Major chord.

The Confessions of. . . films starring cute, wide-eyed urchin Robin Asquith (pictured below left), were as tacky as Blackpool on Bank Holiday Monday and managed to slip in more gratuitous innuendo than in Sid James’ wildest dreams! 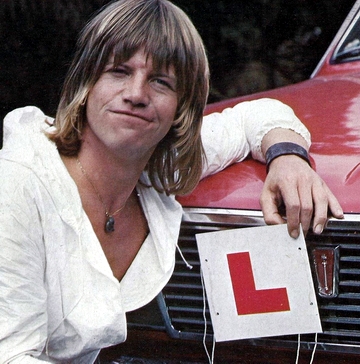 The hugely successful paperback novels and Confessions films managed to make the British suburbs seem as if all those net curtains were hiding a multitude of sinful activities.

Then there were the Carry On films. Sid, Hattie, Kenneth, Charles, Barbara and Co. could (and did) wreak havoc with the English language and history – witness the theme to Carry On Henry, the chorus of which ends “when good King Henry got his Hampton Court”.

In Carry On Camping, Sid James got to wear Glam clothes and ogle Barbara Windsor‘s hot pant-clad bottom. Actually, that seemed to be the plot of all subsequent Carry On films, with only the scenery changing.

Mary Millington became an overnight star by inviting people to Come Play With Me, taking her nurses uniform off and faking an orgasm. Which she would continue to do in a string of badly-written excuses for lots of female nudity and wide-lapel suits until her sad, lonely demise

Imported American sex films were strictly hardcore, and Linda Lovelace, the star of Deep Throat, became a household name despite nobody in Britain having seen the film (video still being a few years away).

Seventies sex films were as tacky as the majority of the bands who strutted their stuff at the time each week on Top Of The Pops. They were laughably coy and incredibly naive.

1 9 8 8 (UK) 6 x 60 minute episodes Barry (later Finbar) Lynch starred as Persse McGarrigle, a postgraduate student who embarks on a globetrotting romantic pursuit of his elusive contemporary Angela, set against a background of...

Martin Q Blank (John Cusak) is a hitherto successful hit man who has just hit burnout. After a bungled job, he gets the chance to redeem himself through a contract in Detroit. His old high school...

View from Daniel Pike, The

Pat Boone was born Charles Eugene Boone - the great-great-great-great-grandson of pioneer Daniel Boone - in Jacksonville, Florida, on 1 June 1934 and started singing in High School. One of his fellow students at North Texas State...

Although collaborators like writer Arthur C Clarke and effects gurus Wally Veevers and Douglas Trumbull were important to the success of 2001, the film is basically a triumph for its producer-director, Stanley Kubrick.  No cinema epic...