To outsiders, it seemed that Pete Duel had everything to live for – a loving girlfriend, a nice home, money and a hit TV series. Yet shortly after 1:25 am on 31 December 1971, this handsome and talented actor killed himself.

Pete Deuel grew up wanting to be a pilot but discovered that he had 20/30 eyesight and changed his plans to medicine.

During two years studying to be a doctor at St. Lawrence University, Watertown NY, the college attended by both his father and grandfather, Deuel appeared in every play staged by the drama department.

Deciding that a life of medicine was not after all for him, Deuel joined the American Theatre Wing, where he spent a further two years studying Shakespeare, Restoration Comedy, elocution, fencing, dancing and body movement. 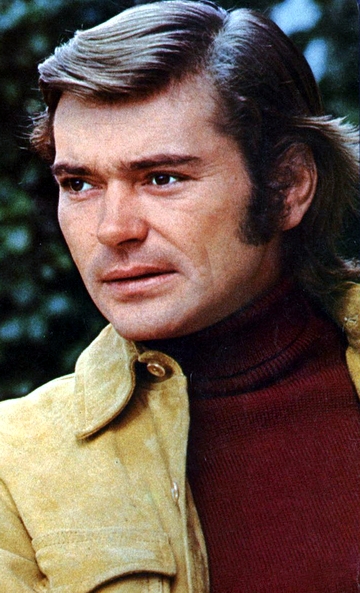 In 1962 Deuel landed his first paid job as an actor, a small part in an off-Broadway production of Electra at the Players’ Theatre in Greenwich Village, where he also served as an assistant stage manager.

Deuel made his TV debut in a one-hour production from the Armstrong Theatre and then went on tour with Tom Ewell in the Broadway hit Take Her, She’s Mine. On his return, he decided to find his fortune in Hollywood.

Arriving in the movie capital, Pete Deuel was cast in mainly villainous roles, before landing a part in the TV series Gidget, which premiered on 15 September 1965.

This led to his casting in one of the lead parts in Love on a Rooftop the following year.

This vehicle gave him the opportunity to show off his talents in both comic and tragic situations.

In 1967, Deuel made his film debut in The Hell with Heroes and impressed so much he was signed to a seven-year contract by Universal.

Appearing as a guest star in a number of shows, including The Fugitive, The Virginian and Ironside, 6′ Deuel was signed to play the role of Hannibal Heyes (alias Joshua Smith) in a new ABC TV series entitled Alias Smith & Jones, about two train robbers who have been promised an amnesty if they can stay out of trouble for one year.

The series debuted in Britain in April 1971, on BBC2 and was an instant hit. For the sake of simplicity, Pete had altered his name to Duel.

However, filming a weekly series was a hard slog and Pete did not relish the demands put upon him. In August 1971 he collapsed on set with the flu and was sent home.

A reputation for being difficult followed although Pete claimed he was not hard to work with, merely a perfectionist. It is thought he was hoping another less strenuous series would rescue him from Alias Smith & Jones and then allow him to return to ‘proper’ acting on Broadway.

Of acting in a series, Pete had said, “The quantity of work is Herculean and the quality is often non-existent.” A salary increased quietened him temporarily. “Contractually I have to do this series,” he told a journalist friend “or some other trash.”

Duel, a politically active Democrat, was vocal in his support for Eugene McCarthy. In November 1971 Duel stood for election to an executive post in his union, the SAG, and was bitterly disappointed when he lost. When the telegram arrived, informing him of his defeat, he tacked it to a wall and then, taking his revolver, blasted a hole through it. 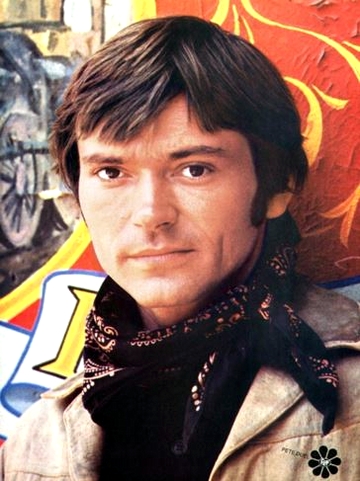 A keen environmentalist and twenty years ahead of his time, Pete liked to picnic far from civilisation, but he always tried to leave the countryside tidier than when he had arrived.

He refused to buy containers that couldn’t be recycled and campaigned to persuade everyone else to do the same.

When he signed an autograph, more often than not he would preface his signature with the words ‘Peace and Ecology Now.’

Pete Duel was a typical man of the sixties. However, he found his release in alcohol rather than drugs.

Thrice arrested for drink-driving, he lost his license but escaped jail by promising the judge he would give up the bottle. Pete received a $1,000 fine and was sentenced to 180 days in jail, suspended for two years. Just a week after his plea to the Judge, Pete Duel would die by his own hand.

In December he volunteered to spend two weekends working for a charity telethon – Toys for Tots. A picture taken at the time shows Duel holding a toy gun to his head. Often, while in the make-up chair, Duel would place his prop gun to his head.

On Thursday 30 December 1971, Pete worked as usual on Alias Smith & Jones. According to the crew he was in high spirits. At his home at 2552 Glen Green Terrace, a two-bedroom bungalow in the Hollywood Hills, Pete read through the script for the next day.

He had one visitor that night. His girlfriend, 29-year old Dianne Ray was a secretary and aspiring actress. Together they watched the latest episode (Duel was not happy with the edition) and a Lakers Basketball game.

Duel drank a lot that evening which led to an argument with Dianne, who went to bed. At 1:25 am Pete walked into the bedroom and stared at her for a long moment before going to a dresser, where he took out a package Dianne (pictured) thought was a forgotten Christmas present. Taking the box into the living room, Pete smiled at his girlfriend and said, “I’ll see you later.” 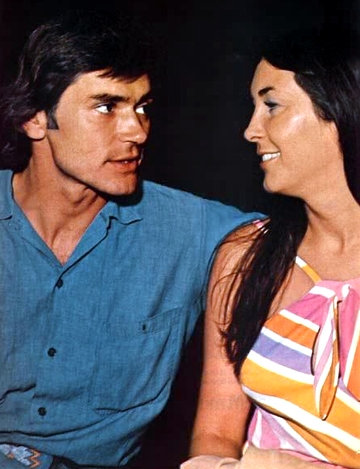 A moment afterwards, Dianne heard a loud sound like a firecracker. Going to find out what had happened, she found Duel lying nude in front of the Christmas tree, a .38 revolver by his side and blood oozing from his right temple.

Gathering her wits about her, Dianne called the police. At first, the authorities did not want to write the death off as a suicide and cited Pete’s open-house policy for aspiring and out-of-work actors as a possible factor. Perhaps one of the resting thespians, jealous of Pete’s success, had killed him.

There was no evidence, however, that anyone other than Duel or Ray had been in the house.

Pete’s friends dismissed the suicide theory and claimed it was an accidental death. None of them came up with a satisfactory theory of why ecologist Duel had bought himself a gun, if not to kill himself.

It is interesting that when he arrived in Hollywood, Pete had given himself five years before returning to Broadway. At the time of his death, Pete had spent six years in Tinseltown and the success of Alias Smith & Jones threatened to extend that period by some years.

A memorial service was held on 2 January 1972 at the Hindu-Christian Self-Realization Temple in Pacific Palisades. Pete was not a member but his manager was.

His funeral took place on 5 January at the Baptist Church in Penfield NY.

Even now, many years after his death, Pete Duel and all that he stood for are remembered not just for what might have been but also for what he achieved in his ever so brief life. He once said, “Fame in show business is not in proportion to actual achievement.”

His business manager had an enduring memory of Pete Duel. John Napier wrote, “I shall never forget early one morning, about 4 am one summer, when Pete stood in front of my home, barefoot in blue jeans, looking out over the vast valley stretching far into the distance, and began in a loud, strong, beautiful voice, to recite Hamlet.”

“Even in my sleepless stupor, I was suddenly caught up in the beauty of the speech as his Hamlet reverberated round the hills. When he came near the end of the speech, the sun began to peak its brilliant head over a nearby mountain as if to pay tribute to a fine performance. ‘I love you, Sun!’ he yelled, and we broke into gales of laughter. Neighbours be damned. It was a happy time. There were many happy times like that.”