1 9 7 0
Shakespeare formed Sherbet in April 1969. Taylor left three months later to be replaced by Alan Sandow (ex-Daisy Roots). At the end of the year, the band recorded its debut single for Festival records, Crimson Ships (originally recorded by Badfinger).

Well before Sherbet commenced touring, the band had honed its skills with an unbelievable eight-month residency at Jonathon’s discotheque in Sydney. Throughout this residency, the band played seven hours a night (8:00 pm – 3:00 am), four nights a week. After that, the band were ready to take on the world.

1 9 7 1
The next member to leave was See who departed in October 1970 to join Flying Circus. From there he joined Fraternity, The Stockley See Mason Band and the John Farnham Band among others.

Can You Feel It Baby? (#22 in August 1971) and a cover of Delaney and Bonnie‘s Free The People (national #36, Sydney #5 in December) were the band’s first national hit singles. In January 1972, Tony Mitchell (ex-Wheelbarrow, Harry Young and Sabbath) replaced Worrall on bass.

1 9 7 2
1972 proved to be a watershed year in Sherbet’s development. Firstly, the band supported Creedence Clearwater Revival on a national tour.

Following that, the singles You’re All Woman (written by Ted Mulry) (#13 in August) and You’ve Got The Gun (#29 in December) were hits; the band took out first place in the Hoadley’s National Battle of the Sounds final; the debut album Time Change: A Natural Progression came out and finally Sherbet was voted Top Australian Group in the Go-Set Pop Poll.

Cassandra came from the band’s second album On With The Show and was the first real indication of the Porter/Shakespeare penned pop masterpieces that were to follow. Both records made extensive use of Porter’s newly acquired Mellotron, which gave Sherbet a distinctive sound and an edge over other Australian pop groups of the day.

The band ended the year with the Best Australian Group honour at the TV Week King of Pop awards.

The highly commercial Slipstream album reached #5 in October 1974 and went on to sell over 100,000 copies.

Braithwaite kick-started his solo career in October 1974 with the national #1 hit single You’re My World. He had already taken the lead role in the local stage production of The Who‘s Tommy in March 1973 and rumours began to circulate that he would leave the group. 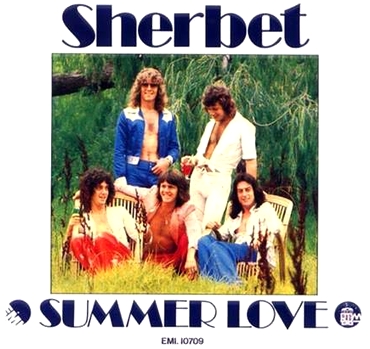 Sherbet’s only release on EMI, Summer Love became the perfect summer hit single when it reached the number one spot in March 1975. Summer Love was the first Sherbet single to be issued in the UK.

The band’s 4th album, In Concert, Live produced the single Wishing Well (a version of the classic Free song) in April.

The band scored its first number one album with Sherbet’s Greatest Hits 1970 – 1975 in August. They ended the year with the release of their most ambitious album to date, Life . . . Is For Living.

The album produced the hit singles Life and the double A-sided Only One You. To coincide with the album’s release, the band embarked on the extensive Life national tour.

1 9 7 6
In January 1976, founder member Clive Shakespeare left the band due to “personal and musical differences”. Initially, Ian “Gunther” Gorman (ex-Home) came in as his replacement until Harvey James (ex-Mississippi, Ariel) took over permanently in April. Shakespeare’s last recording with the band,

The band took to the road with the national Howzat! tour and released two more singles, Hollywood Dreaming and Rock Me Gently.

In the meantime, CBS/Epic had released Howzat! in the UK, Europe and South-East Asia, while MCA had issued it in the USA.

The single reached #4 in the UK in September and Top 10 in South Africa, Israel, a number of European countries and various parts of South-East Asia (including #2 in Thailand). Sherbet embarked on an extensive overseas tour that took in the UK, the USA and South-East Asia.

"Bela Lugosi's dead, undead, undead..." intoned Peter Murphy on the single that released a new genre - not to mention a fair scattering of...

The John Bull Printing Outfit - originally produced by the Charter Stamp Company, a printing firm established in the City of London in 1922...

"Welcome to Potters Bluff" Tourists and visitors to the sleepy coastal town of Potters Bluff, Maine, are being brutally murdered by the locals. What's more...