The term ”Cold War” was first used by Bernard Baruch, advisor to US President Truman, in a speech made in April 1947.

He spoke about Truman’s intent for the USA to “support free peoples who are resisting attempted subjugation by armed minorities or by outside pressures”.

The Cold War was fueled by propaganda, undercover activity by intelligence agencies, and economic sanctions; and was intensified by signs of conflict anywhere in the world.

Arms-reduction agreements between the USA and USSR in the late 1980s, and a reduction of Soviet influence in Eastern Europe led to a reassessment of positions, and the ”war” was officially ended in December 1989.

Mistrust between the USSR and the West dated from the Russian Revolution of 1917 and contributed to the disagreements which arose during and immediately after World War II over the future structure of Eastern Europe.

The Atlantic Charter – signed in 1941 by the USA and the UK – favoured self-determination; whereas the USSR insisted on keeping the territory obtained as a result of the Hitler-Stalin pact of August 1939.

After the war, the USA was eager to have all of Europe open to Western economic interests, while the USSR, afraid of being encircled and attacked by its former allies, saw Eastern Europe as its own sphere of influence and, in the case of Germany, was looking to extract reparations.

As the USSR increased its hold on the countries of Eastern Europe, the USA pursued a policy of ”containment” that involved offering material aid to Western Europe (the Marshall Plan) and to Nazi-victimised countries such as Greece and Turkey.

Berlin became the focal point of East-West tension (since it was zoned for military occupational governments of the USA, UK, France, and USSR, yet was situated within what was then Soviet-controlled East Germany).

This culminated in the Soviet blockade of the US, British, and French zones of the city in 1948, which was relieved by a sustained airlift of supplies.

The growing divisions between the capitalist and communist worlds were reinforced by the creation of military alliances: the North Atlantic Treaty Organisation (NATO) was set up in the West in 1949, and was followed in the East by the Warsaw Pact in 1955.

Tensions between the two blocs increased significantly at a number of points during the following two decades, and were prompted on the one hand by the USSR’s military suppression of anticommunist revolutions in Hungary in 1956, and then in Czechoslovakia in 1968; and on the other hand by US participation in the Vietnam War between 1964 and 1975 and the Cuban missile crisis of 1962, during which the two superpowers came closer than ever before to nuclear war.

The crisis was initiated by the siting of Soviet rockets in Cuba in October 1962, after which US President Kennedy, by means of military threats and negotiation, forced the Soviet leader Nikita Khrushchev to back down and dismantle the missiles.

For 30 years peace was based on Mutual Assured Destruction (MAD), a strategy that meant that no power could “win” a nuclear war.

The conflict between the Communist bloc and the West between 1945 and 1989 may have been “cold” (without fighting), but the spy war was often violent. A complete “American” town was built in Russia to train spies for infiltration and service in the USA, and the Russians recruited many Westerners sympathetic to Communism as agents:

Donald Maclean kept the Russians informed of US and British secrets while he was a high official in the British Embassy in Washington. Kim Philby, another double agent spy, reached a high rank in the British Secret Service (MI6) while working for the Soviets.

Klaus Fuchs was a brilliant German physicist who fled the Nazis in 1933 and settled in Britain. He took part in the top-secret development of the atom bomb, during which time he passed technical details to a Russian agent.

The West also found sympathizers in the Soviet Union. Oleg Penkovsky was a colonel in Soviet Military Intelligence (GRU) who offered to work for the British in 1961. He passed over 5,000 photos of secret documents before he was arrested, tried and executed for treason in 1963.

The USA – and several Western countries – lived under the constant threat of a Soviet invasion, which seemed very real at the time. Various public, underground locations were designated as civil defence shelters and in theory, you could go there when Russia dropped the bomb.

Companies sold backyard Fallout Shelters to protect families, and schools in the US had air raid drills and students learned how to get under a desk with their heads and necks covered.

In 1963, a direct “hotline” was set up between the White House and the Kremlin, to reduce any sudden East-West tensions.

It was hoped the direct link would reduce the risk of accidental nuclear war, and enable a faster, more secure exchange of information between the leaders of the two most powerful nations in the world.

The Cold War also had an important impact upon Western, and in particular US, culture. Many US science fiction films from the 1950s onwards pitted US citizens against the forces of extraterrestrial ”evil empires”, which have subsequently been interpreted by film critics as metaphors for the perceived threat of communist expansionism.

In literature, the genre of the spy thriller was developed by writers such as John le Carré and has since become enormously popular, particularly through the novels of Ian Fleming, the inventor of the British Secret Service agent James Bond.

During the late 1970s and 1980s, tensions between the two blocs were exacerbated still further: first by the USSR’s invasion of Afghanistan in 1979 and the resultant war, which continued until 1987; and then by the aggressive foreign policy pursued from 1981 to 1989 by US President Ronald Reagan.

In 1980/1981, for example, the USA supported the newly formed Solidarity trade-union movement in Poland, and in 1983, Reagan publicly referred to the USSR as an ”evil empire”.

The major point of tension, however, arose with the increasing intensification of the arms race, which placed heavy demands upon the economies of both countries, and was given a quite new direction by Reagan’s insistence on militarising space through the Strategic Defense Initiative, popularly known as ”Star Wars”.

Chiefly because of his commitment to the Star Wars program, Reagan also turned down a disarmament agreement proposed by Soviet leader Mikhail Gorbachev in 1986.

However, a process of détente between the two superpowers had in fact been started as early as 1972, with the signing of the first Strategic Arms Limitation Talks (SALT I) accord.

The ”thaw” in East-West relations was further advanced in the 1980’s by the 1987 treaty which pledged both NATO and the Warsaw Pact to remove all medium-range Intermediate Nuclear Forces (INF) from Europe, and then by the withdrawal of Soviet troops from Afghanistan in February 1989, as well as by Gorbachev‘s resolve to drastically reduce the size of the USSR’s conventional forces in 1989 and 1990.

After the opening of the Berlin Wall in 1989 and the overthrow of the ruling regimes of Poland, Czechoslovakia, Romania, and Hungary in the same year – which together heralded the beginning of the dissolution of the USSR itself – the end of the Cold War was formally declared in December 1989, at a summit meeting in Malta attended by Gorbachev and US President George Bush.

The new relationship was further substantiated at the Paris Conference on Security and Cooperation in Europe (CSCE) in November 1990. 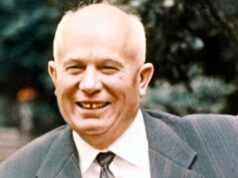 Born in Cleveland, Ohio, in 1949, Stiv Bators (real name, Steven Bator) formed his first bands Mother Goose and Frankenstein, who transmuted into The...

January 01 - Czechoslovakia is peacefully divided into the Czech Republic and Slovakia. 01 - The European single market is created by the European Economic Community...