Made in colour in the wake of the success of ITV’s Emergency – Ward 10, No Time For Tears is virtually plotless with an all-star cast of fine British players from the great English classic era.

The film’s episodic story follows the career of young, impressionable probationary nurse, Margaret Collier (Sylvia Syms) and the many trials and tribulations of her chosen profession at the (fictitious) Mayfield Children’s Hospital. 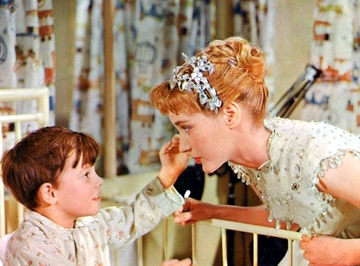 Matron Hammond finds herself especially drawn to two terribly neglected children whose home life so appals her that she feels bound to take drastic action. And so we follow the fortunes – or misfortunes – of George (Christopher Witty) and Cathy (Adrienne Posta in her movie debut) Harris and their problem parents (Victor Brooks and Angela Baddeley).

Another story follows Bridie McKenna (Judith Stott), a pretty girl of 15 who longs to dance but cannot walk normally because her foot has been twisted since infancy. She presents quite a problem to Dr Seagrave, who finds himself at loggerheads with her mother over the question of an operation. And Bridie also happens to have fallen in love with a National Service boy, which doesn’t make life any easier for her.

There are also the stories of young Tommy (Jonathan Ley), paralysed and blind, for whom Nurse Margaret develops a very deep affection, and a pair of twins who are so identical that the hospital is often in turmoil as a result – such as in a near case of mistaken appendectomy.

In 1951, at the Sea Shadows Inn on the Mendocino County coast, Doris (Ellen Burstyn), a 24-year-old housewife from Oakland, meets George (Alan Alda), a...

Rob Reiner's portrait of a couple whose growing attraction toward each other threatens to disrupt their friendship. Bouncy blonde Sally (Meg Ryan) is the "modern...

Robert Redford and Jane Fonda were well cast in Sydney Pollack's The Electric Horseman - He as a former rodeo champion now reduced to advertising breakfast...