Dr Terror’s House of Horrors kick-started the Amicus series of British compendium horror films and was shot at Shepperton Studios with a budget of  £105,000.

The actor, musician, and later beloved children’s entertainer/presenter Roy Castle was added to the film as jazz trumpeter “Biff” Bailey after Acker Bilk had to pull out due to ill health.

The strangest cast member is surely Alan “Fluff” Freeman. The disc jockey and Top of the Pops presenter played Bill Rogers in the killer plant segment of the film. He was tentatively exploring an acting career at the time but his wooden performance in Dr Terror’s House of Horrors seemed to put an end to this ambition.

The film opens as a group of men (played by Alan Freeman, Neil McCallum, Donald Sutherland, Roy Castle, and Sir Christopher Lee) board a railway carriage and sit down in one of the compartments. Just before the train departs, one more traveller – the mysterious Doctor Schreck (Peter Cushing) joins them in the carriage.

Once in the compartment with the men Schreck soon dozes off and his deck of Tarot cards spills out. “That’s a funny looking deck, man,” says Roy Castle helpfully. Schreck, a “Doctor of Metaphysics”, duly offers to use the cards to predict the future of each man.

Thus begins a series of five fifteen-minute stories, foretelling future events of those present in the train compartment, starting with ‘Werewolf’: Architect Jamie Dawson (Neil McCallum) travels back to his old home in the Scottish Highlands to make some alterations for the new owner, but there is something not quite right about his old family home.

Strange noises are coming from something prowling outside and the key to the cellar has disappeared. When Jamie investigates the cellar, he finds a wall with fresh plaster concealing a dusty coffin.

The next segment is ‘The Creeping Vine’ in which Bill Rogers (legendary DJ Alan Freeman) returns from a holiday with his wife Ann (Ann Bell) and daughter Carole (Sarah Nichols) to find a strange, leafy vine has taken root in the garden and wrapped itself around part of the house.

The vine – which seems to move of its own accord – refuses to yield to garden shears and eventually takes a disliking to the family dog. A perplexed Bill turns to professors Drake (Jeremy Kemp) and Hopkins (Bernard Lee) for assistance, but the pesky plant is soon proving to be very dangerous indeed.

Biff and his chirpy cockney band are naturally delighted when told they are headed to exotic Haiti for a tour. But once there, Biff can’t resist nosing around and pilfering the local voodoo beat in the form of some scribbled notes – despite expressly being warned not to – “Do not steal from the god Dambala!”

Back in England, we see what happens when Biff and his group attempt to play these forbidden voodoo tunes.

The best story – ‘Disembodied Hand’ – features Christopher Lee as the pompous and vitriolic art critic Franklyn Marsh who has made himself famous for his rants against modern art, with Eric Landor (Michael Gough) a particular target.

Landor gains his revenge by having a new piece of work brought out for Marsh to evaluate. “Now this is quite a different matter,” Marsh says when he looks at the work, praising it as wildly as he trashed Landor’s work. An amused Landor reveals the artist was a chimpanzee and Marsh is suitably humiliated.

Landor then follows Marsh around to public engagements constantly reminding him of his errant judgment and generally begins to ruin his career.

Christopher Lee is gloriously snotty and panto villain posh as Marsh and Michael Gough elicits genuine sympathy from the audience at times.

The last future to be told is that of Bob Carroll (Donald Sutherland) in ‘Vampire’.

Bob and his French wife Nicolle (Jennifer Jayne) move to a small New England town where Bob is to become a local doctor – but their arrival seems to coincide with a strange outbreak of “pernicious anaemia”. In other words, someone or something is draining blood from the local population.

Strange cases start to pop up in Bob’s surgery of fang marks, and colleague Dr Blake (Max Adrian) comments that “If this were Medieval times I’d almost say he was a victim of a vampire!” However, Bob is not laughing when Blake points the finger of suspicion at his wife Nicolle.

The film ultimately returns to the railway carriage where the train journey is coming to an end and Doctor Schreck is about to reveal to these men their true fates and his ultimate identity. If you’ve seen subsequent Amicus compendium horror films, the ending will come as no surprise whatsoever. 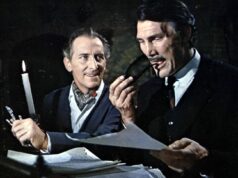 Like most movies about Vietnam, Uncommon Valor is more about guns and explosions than it is about people, but it's never dull and the massive battle...

There are few more controversial subjects in Britain than 'the Troubles' in Northern Ireland and the activities of the IRA. It was therefore extremely bold...

Enigmatic young Melina (Louise Sorel) is the runaway daughter of an American magnate who has fallen in with a group of Chelsea beatniks called...