This musical fantasy update on the classic tale of Romeo and Juliet is set on Earth at some point in the future. The globe is divided into two rival factions: Beatland, which is populated by teenage beat musicians and singers, and Balladisle, which is devoted to (you guessed it)  the propagation of ballads.

Into this tense atmosphere arrives Intergalactic Ambassador Wilco Roger (Carry On stalwart Kenneth Connor), from the Congress of the Universe, who is dispatched by the Ruler of the Galactic Federation (Jerry Desmonde in a pink jumpsuit) and is charged with settling the feud between the two groups of inhabitants.

He meets Mr A&R (a silver-suited Frank Thornton), a local inhabitant who has managed so far to keep the two parties in a state of reasonable peace.

He is responsible for judging the annual Golden Guitar contest between the two factions, although in recent times the contest had always been declared a draw in order to avoid an outbreak of war. In turn, this has simply strengthened the rivalry.

Wilco decides to bring the two opposing forces together by encouraging a boy and a girl from each island to meet. Steve (from Beatland) and Helen (daughter of the Prime Minister of Balladisle) are brought together and fall in love. 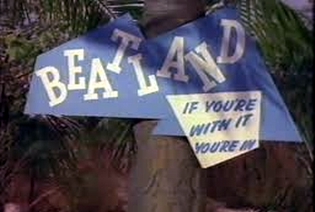 After a series of adventures, the two young people flee to the Echo Chamber, the home of Mr A&R, where they seek refuge.

Meanwhile, the two opposing nations declare war on each other – cue a crash-helmeted Terry Scott at the helm of a fleet of mini-skirted storm troopers on Lambrettas.

Steve (Iain Gregory) and Helen (Barbara Brown) manage to stop the hostilities but are barred from entering the annual Golden Guitar contest because of their behaviour.

Wilco and A&R indulge in a spot of subterfuge before the contest and evolve a neat little plot which they hope will resolve the prevailing mood of acrimony which surrounds the competition.

After each group has performed, Mr A&R declares the contest to be yet another draw and then announces that he himself has an entry which the audience will judge.

Steve, Helen and their respective groups appear, steal the show successfully, and all quarrels are forgotten.

The two islands unite as Musicland and the strife between them is ended. They all mingle as one big happy family. The End.

Words alone can not do justice to a picture that combines the talents of Lulu and the Luvvers, The Graham Bond Organisation (featuring pre-Cream era Jack Bruce and Ginger Baker), Derek Thompson of Casualty as a lemon-quiffed folk singer, and an assortment of gonk puppets.

It’s really just an excuse for Carry On style lunacy by comedians in bizarre sci-fi costumes – interspersed with musical numbers.

Gonks Go Beat is the epitome of Swinging 60s silliness, but it certainly has its moments: The Graham Bond segment; a great Ginger Baker-led drumming jam in Balladisle prison; the clunky teen lingo; the clothes; the twisting; the embarrassing attempts of the ‘proper’ actors to be down with the kids, and indeed the all-round enjoyment the film offers if you take it for what it is – a throwaway pop flick from the mid-60s.

A mere four years later Lulu had her own BBC TV show on which she introduced Jimi Hendrix.