Jeff Forrester (William Wellman Jr) inherits a ski lodge at Lake Tahoe. With the help of his friend and promotions director Danny Frazer (James Stacy) and his secretary Jo-Ann Wallace (Beverly Adams), he wants to renovate the lodge as a ski resort for young adults.

They bring in a large number of friends to help with the renovation, but Jordan (Walter Maslow) – who holds a mortgage on the lodge and wants to take possession – sends a thug called Burt (John Anthony Hayes) to impede the group’s progress.

Burt and Jeff have a ski fight in which Burt saves Jeff’s life, and thereafter he stops working for Jordan.

The success of the enterprise ensured, the friends are able to pay off the mortgage. Jo-Ann and Jeff get married and Burt and his estranged girlfriend, Janine (Jill Donohue), are reconciled.

The Nooney Rickett Four (??), The Astronauts, Joni Lyman, and The Reflections were called upon to supply the music.

Winter A Go-Go was filmed at Heavenly Valley on the south shore of Lake Tahoe. 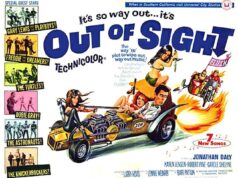 The final (and weakest) picture in the superb five-part Planet Of The Apes series, Battle centres on a war that will decide who will finally dominate...

Thelma and Louise is the ultimate female fantasy trip - a road movie with the predictable elements of every on-the-lam flick ever made, including aerial...

Before there was Deep Impact (1998) and Armageddon (1998), world destruction was done up in 1950s sci-fi style. The rights to Philip Wylie and Edwin Balmer's 1932 doomsday novel When Worlds...

Ada (Holly Hunter) is a wilful mail-order bride who has, for some unexplained reason, been mute since the age of 6. When she arrives to...