Behind The Green Door starred former cheerleader and Junior Olympic diver Marilyn Chambers (born Marilyn Briggs), whose credit as the Ivory Snow girl – the wholesome model who appeared cuddling a chubby baby on detergent powder boxes boasting the product was 99.44% pure – gave her virtually mythic qualifications for fulfilling the fantasies of the red-blooded American male.

Chambers, though, had some conditions for producers Jim and Artie Mitchell before she would agree to take the lead role in their feature-length pornographic film: she insisted that all the actors be tested for sexually transmitted diseases, and she demanded a percentage of the movie’s gross receipts. The movie – which cost $50,000 to film – grossed an astounding $50 million. 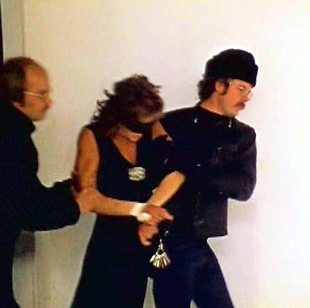 In the movie, Gloria Saunders (Chambers) is abducted and taken to a mysterious location to become the star attraction at a live sex show.

She is set upon by lesbians and screwed ad infinitum by a black man who wears a tiger tooth necklace.

Unwilling at first, Gloria – whose only dialogue consists of pants, groans and sighs (when her mouth is free) –  is caught up in the spirit of things, culminating in a scene involving a circus trapeze and four men.

During the sexual activities, the music slows into a ritualistic drone while the images saturate in colour and overlap, lulling the audience into a trance-like state.

Through the use of colour saturation, music, and slow motion, the Mitchell Brothers mimic the state of hypnosis, creating a kinky psychedelic experience.

Marilyn Chambers and the Mitchell Brothers followed up Behind The Green Door with another hit, The Resurrection of Eve. 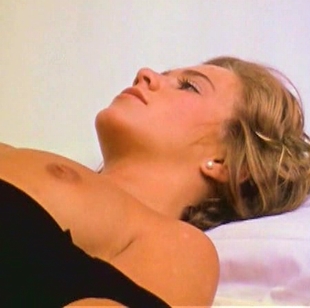 But by 1980, after appearing in a cabaret act as a singer and dancer and cutting a disco record, she returned to adult films, including Insatiable.

Chambers stopped making hardcore movies in the mid-1980s but returned in the late 90s with Still Insatiable. In between, she specialised in soft-core late-night cable movies.

Marilyn Chambers was found unconscious at her home in Canyon County, California on Sunday 13 April 2009, by her 17-year-old daughter, McKenna.  The autopsy revealed she had died of a cerebral haemorrhage and an aneurysm related to heart disease. She was ten days away from her 57th birthday. 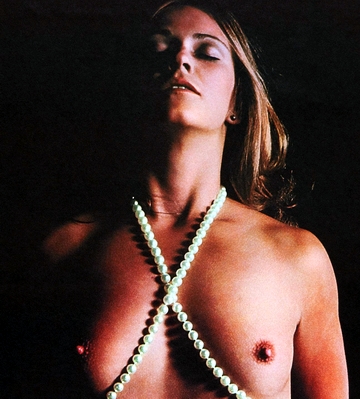