Carry On Girls conjures up the ultimate in wet and windy, bored and mindless seaside communities, Fircombe.

The ever-enterprising Sidney Fiddler (Sid James) dreams up the entertainment boosting and business attracting idea of a beauty contest and epitomises the feel-good innuendo and down-to-earth humour of the series.

The film establishes two camps, with Sid’s glorious celebration of innuendo vs. Augusta Prodworthy’s (June Whitfield) downtrodden troop of campaigners against “the sexual gratification of a lot of drooling men!”

There’s an air of staleness about some of the sequences as if all had done this so many times that the fun and games were getting a bit wearing.

Indeed, everybody is showing their age and poor old Sid, still guffawing at every gag and chatting up the contestants, looks clearly older.

By now Talbot Rothwell was running out of new ways to coyly refer to sex and the nudge, nudge sense of humour was beginning to wane at the box-office.

Still, it’s an essential entry in the series. 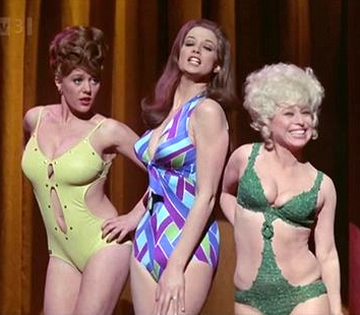