Confessions Of A Driving instructor (1976)

The third in the series of smutty comedies based on the novels of Timothy Lea is something of an embarrassment for all concerned.

The story about the rivalry between two driving schools never gets out of first gear and the mix of doubles entendre’s and soft-core gropings can only be described as abysmal. Taking over a dilapidated driving school, they rename it the Noglea School of Motoring, offering Timmy and Sid the perfect opportunity to live life in the fornicating fast lane with a bulging client book of women determined to lose more than just their ‘L’ plates.

Timmy’s first student is the slinky, crimson-lipped Miss Hargreaves (Suzy Mandel), who can’t keep her hands off Timmy and takes him for an unscheduled stop on a building site.

With Sid and Rosie living over the driving school business, Timmy decides to leave the family home too and takes up lodgings with lusty landlady Mrs Chalmers (Liz Fraser, pictured below). Mrs C dotes on her new guest but secretly yearns to give him more than just a signature in his rent book, but Timmy is already preoccupied lusting after her attractive daughter Avril (Maxine Casson). The next client for Timmy proves more of a challenge, Miss Slenderparts (Irene Handl), an elderly one-woman disaster area (pictured) who’s failed her driving test an incredible 43 times, and duly causes havoc by driving along the motorway in the wrong direction.

Next is unsatisfied wife and golf widow Mrs Dent (Sally Faulkner), who puts the bunkers at the local golf course to better use.

Meanwhile, Timmy is attempting to woo the daughter of fearsome Truscott, the jolly hockey-sticks posh-speaking Mary (Lynda Bellingham, pictured below), but their amorous adventures end up with a car in the park’s local lake and splashed all over the local newspapers. Finally, Upper-class student Lady Snodley (Chrissy Iddon) fancies herself as an artist and persuades Timmy to pose nude for her – with calamitous results.

If it wasn’t for the fact that the members of the cast must have read the script beforehand, you could feel some sympathy for them. Robin Askwith mugs like a trouper, but it’s sad that accomplished comedy actresses such as Irene Handl and Liz Fraser signed up for rubbish such as this. 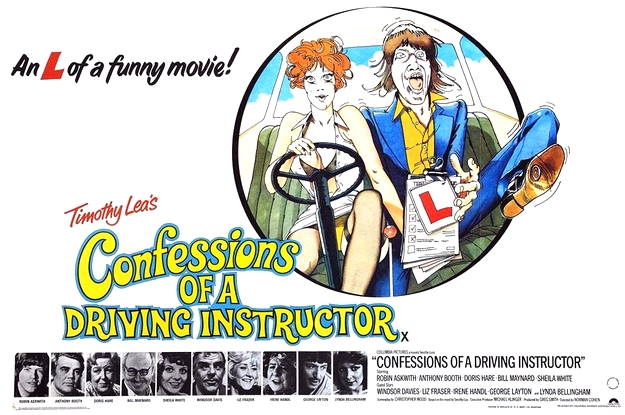