Confessions From A Holiday Camp (1977)

The Confessions films relied on a blend of saucy humour and ‘What the Butler Saw’-style smut (much loved by the Carry On team).

This was the fourth and last of these cheap but cheerful comedies, with Robin Askwith returning as an over-sexed entertainments officer at a camp run by an ex-prison officer.

The tone is set by the opening shots of a rain-swept Havant railway station, and the main narrative unfolds in a grey Hayling Island. 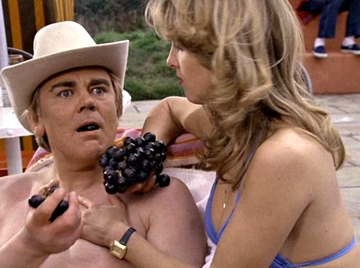 Life is just a bowl of grapes for Timmy Lea (Robin Askwith) and his brother-in-law Sid (Anthony Booth) as they lie in the sun at the Funfrall Holiday Camp. As Entertainment Officers their job is largely about keeping themselves entertained.

Which is why they are by the pool being fed grapes by a couple of bikini-clad beauties.

But they’re not long for the sweet life. The camp has been sold and the new owner, William Whitemonk (John Junkin) is determined to run the place in his fashion – a fashion he practised for years as Chief Warder of Dartfleet Prison.

He orders Sid to organise a beauty contest – Miss Great British Holiday Camps – and Sid makes it clear to Timmy that if they don’t deliver the goods they’ll be in their old, familiar position – unemployed.

So Timmy gets stuck in amongst the girls and uses his boyish charm to persuade him to let him enter them . . . for the contest.

One of the girls, Brigitte (Linda Hayden) is a camp host and, therefore, ineligible for the contest, but she still has a very close relationship with Timmy.

Nothing is going to keep Timmy’s Mum (Doris Hare), Dad (Bill Maynard) and sister Rosie (Sheila White) from a free holiday at the camp.

Arriving at the station they get into the first car they see – which just happens to belong to a funeral party.

In no time at all, Dad has the widow and her fellow mourners singing along in a rousing chorus of My Old Man Said Follow The Band.

Meanwhile, Timmy is being seduced in his chalet, first by Blackbird (Nicola Blackman) and then by Glad (Caroline Ellis), both of whom want to make sure of their chances in the upcoming beauty contest.

Timmy and Glad are so noisy in their passion that they wake Sid in the chalet next door and he angrily gets out of bed to peer through Timmy’s window. He is seen by the gay Lionel (Lance Percival) who knows some queer goings-on when he sees them,

Thinking that Sid is a Peeping Tom he grapples with him and the ensuing rumpus knocks the whole row of chalets down like a set of dominoes . . .

Timmy has an unfortunate accident when he is seduced by a shapely woman (Penny Meredith) in the sauna – in his passion, he burns his bum on the brazier and flees in agony. He is seen, but not recognised, by Whitemonk and Brigitte who think he is a streaker. 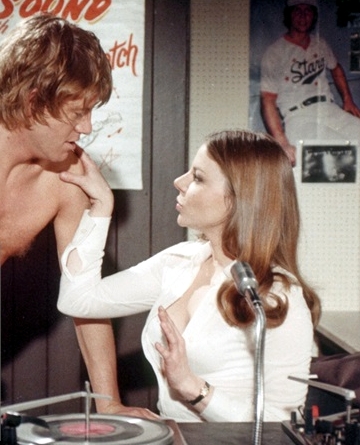 Later, Timmy is blowing up a number of animal-shaped balloons when he is visited by Brigitte, who proceeds to make love to him, unaware that the gas cylinder is still pumping air into a rubber hippo.

Eventually, the hippo explodes, hurling a naked Timmy into the swimming pool, where he is seen (but again not recognised) by Whitemonk.

He escapes into the camp announcer’s room and – needless to say – the announcer is a very shapely girl who is just dying for some attention. Timmy is happy to oblige, unaware that the sound effects of their love-making are being broadcast throughout the camp.

When Mrs Whitemonk (Liz Fraser) arrives to be a judge in the beauty contest, Timmy is sent to fetch her. On the way back from the station, she tries to seduce him in the car, but seeing a fairground next to the camp suggests they go on the ghost train.

Unfortunately for Timmy, Dad and Mum are in a ghostly mood too, and they have a very unusual (and unclothed) coming together . . .

Eventually, the beauty contest gets underway, compered by host Roughage (Colin Crompton), but the whole event is ruined before it starts by young Kevin (Nicholas Owen), who starts a massive cake fight. Knowing when to make their exit, Timmy and Sid grab a go-kart and drive off. As Timmy says, moments before they hurtle into the boating lake, “There must be an easier way to make a living!”.

Irish director Norman Cohen, who handled three of the quartet (Val Guest made the original Confessions of a Window Cleaner) also made the movie versions of Till Death Us Do Part and Dad’s Army.

These films were shown in Soho sex cinemas, for God’s sake. What was going on? 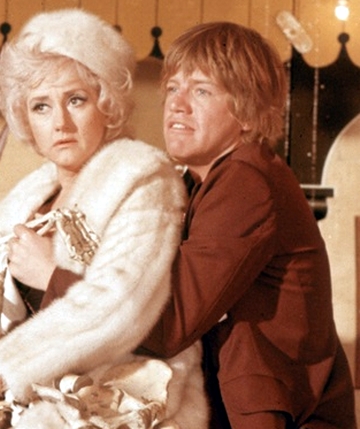