Dolemite (Rudy Ray Moore) is a bad mutha pimp who is set up by his arch nemesis Willie Green (D’Urville Martin, who also directed) and the cops.

They plant drugs, stolen furs, and guns in his car and get him sentenced to 20 years in jail.

With Green now doing some major drug trafficking, the sympathetic warden releases Dolemite to intervene and prove his own innocence.

Given that Dolemite literally murders four people on the drive home from jail, it seems like it probably wasn’t the best plan. (They were all trying to kill him, but still.)

That’s about it for plot – the rest of the film features Dolemite killing people (usually with poorly choreographed karate), having sex, and swearing profusely in an odd rhymey way which just may have been the invention of rap.

He also has to spend a lot of time dodging the boom mic. It’s visible in every other scene!

Fortunately, madam Queen Bee (Lady Reed) sent all of Dolemite’s ‘ho’s’ to kung fu school while he was in the slammer so the dude has a veritable army.

The New York Times called the film the Citizen Kane of Blaxploitation.

It’s definitely one of the ultimate cult classics and watching the film these days is like opening a time capsule from the 70s, replete with the funkiest of fashions and old-school jive talk. 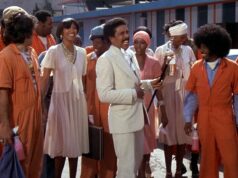 Richard Roundtree and Moses Gunn returned in the sequel to the huge blockbuster Shaft (1971), which kicked off the early 1970s blaxploitation craze - and...

A small group of truckers defy the authorities and head out of the state to avoid a speed trap imposed by a mean sheriff....

The action moved from the racetrack to the streets of San Francisco for this follow-up to the 1969 blockbuster The Love Bug. Herbie Rides Again not...