It’s 1947 and the war is over. Gordon Laid (Robin Askwith), an innocent demobbed soldier, meets glamorous Maxine Lupercal (70s sex icon Fiona Richmond), a member of a travelling troupe of actors while staying in a friend’s posh Mayfair flat.

Gordon closely resembles a member of the troupe and mistaken identity finds him embroiled in various murders and an international spy plot involving a cigarette lighter that strangely affects electricity. 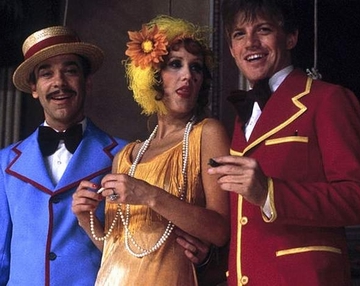 The action reaches its comical climax on stage with Gordon and his double as the spies and the police converge on the theatre is a desperate attempt to retrieve the missing cigarette lighter.

Fiona Richmond is enchanting and ravishing throughout, exquisitely dressed in an array of exotic outfits that come off at regular intervals.

In 1692 a witch named Elizabeth Selwyn (Patricia Jessel) is burned at the stake but summons supernatural powers to save herself. Three years later a...

Gilbert Lowell (a pre-TV hunk Anthony Edwards who would become the future star of the hit TV series ER) and Lewis Skolnick (Robert Carradine) are...