“I am Captain Nemo. I have been asleep for 100 years aboard my submarine, Nautilus. I would probably still be left encapsulated had it not been for two intrepid agents of American Naval Intelligence who quite by chance came upon my ship trapped by seismic underwater quakes.”

He is then assigned a mission to stop megalomaniac Professor Waldo Cunningham (Burgess Meredith, overacting for all he’s worth) who is demanding payment from Washington DC of one billion dollars to prevent him from firing a nuclear warhead at them.

Along the way, Nemo resumes his search for the lost city of Atlantis in his nuclear-powered submarine, the Nautilus. He eventually meets Atlantean King Tibor (Horst Bucholz) and discovers that Professor Cunningham has beaten Nemo to Atlantis – in his own high-tech submarine, the Raven – and has enslaved the underwater people with mind-control head-bands.

After an undersea battle between Nautilus and Raven in which the Raven is apparently destroyed, Captain Nemo leaves the freed city of Atlantis behind – ensuring the Atlantean civilisation will be “untouched by our progress”.

This made-for-TV movie was cobbled together from three one-hour episodes – Deadly Blackmail, Duel in The Deep and Atlantis Dead Ahead –  of a short-lived Irwin Allen-produced TV series of the same name.

The eight-foot-long model of the Nautilus used in the film was originally built as one of the Seaview models for Voyage to the Bottom of the Sea (1961), also an Irwin Allen production. Professor Cunningham’s submarine, the Raven, was modified from a Space: 1999 Eagle play-set by Mattel. 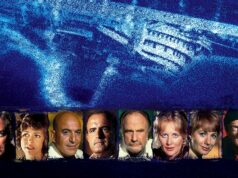 When 25-year old Parisian student, Gérard Morere (Jean-François Calvé), hears a lecture about a treasure lost in the Mediterranean after the Peloponnesian War, he...

Just before Arthur Penn would change the landscape of the American film industry forever with Bonnie and Clyde (1967), he directed The Chase. Derided at...