Twentieth Century-Fox’s answer to the black action cycle initiated by MGM’s Shaft (1971) was this crude and violent underworld melodrama.

In the hope of reproducing the success of the Richard Roundtree character, Fox even employed Shaft‘s producer, Joel Freeman, and one of its writers, John DF Black.

In a one-note role as Mr T, a super cool LA private eye drawn into a gangland feud, Robert Hooks is out-acted by Paul Winfield (as a double-crossing racketeer) and Julius Harris (as a rival hood) but then they do have slightly more varied characters to play.

This was the first movie directed by actor Ivan Dixon, a former Hogan’s Heroes regular. 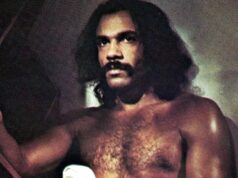 Desk Set starred Katharine Hepburn as Bunny Watson, the head of the library of the Federal Broadcasting Network. The television station is bringing in an efficiency-boosting...

Respected doctor Sir James Forbes (André Morell) comes to a Cornish village with his daughter Sylvia (Diane Clare) after a request from his old...

A small-town housewife with amnesia (Geena Davis) who hires a private detective (Samuel L Jackson) to find out about her past life discovers that...