She soon becomes obsessed with her 12-year-old stepson, Marcus (Mark Lester of Oliver! fame), who she learns has just been expelled from school for mysterious offences. 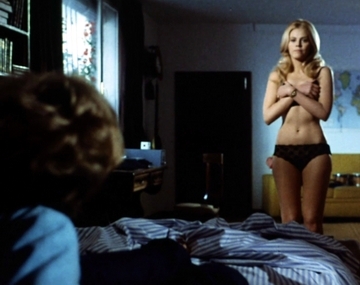 It’s clear from the outset that Marcus lusts after his stepmother. He fondles her breasts, ogles her as she strips, and plays peeping tom when she and his father make love.

In his spare time, he draws pornographic pictures and tortures animals.

He is obviously a brilliant and lonely child, but he also enjoys, exploits, and feeds her increasing paranoia about him as Elise begins to suspect that he may have murdered his mother, who mysteriously died in a bathtub accident.

As a result of the boy’s manipulations, Paul becomes convinced that Elise is persecuting his son and sends her to a psychiatrist. Elise is so demoralised that she tries to kill Marcus and is taken to a mental hospital, where she fantasies over her relationship with Paul and Marcus.

It is when she is released, apparently cured, that events begin to take an even more sinister turn. This English/Italian co-production was originally titled Diabólica Malicia and released in some markets as Night Hair Child.

Most critics slammed the film on release for its distasteful theme, but that did nothing but good for the box office returns.