These three outlandish outsiders are all men and only come out at night, while unearthly roaring sounds emanate from the depths of their ramshackle Gothic house, and it looks as though all of George Lucas’ Industrial Light & Magic has set up shop in their basement.

Ray, Art and Rumsfield determine to get to the bottom of the Klopeks’ weirdness by fair means or foul. 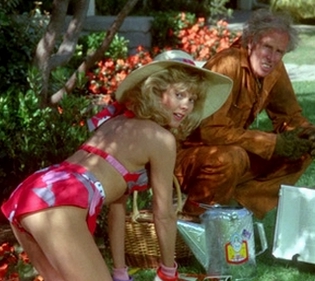 Are the Klopeks merely naturally reticent – as is their right – or are they burying people in the backyard? It’s to director Joe Dante’s credit that you don’t know until right at the end.

Meanwhile, the film provides lots of little vignettes of suburban life, involving such staples as the neighbour who allows his dog to crap on other people’s lawns and the housewife who likes to do her yard work in the briefest of halter tops.

Tom Hanks tarnishes his acting reputation in a throwaway role and Dana Olsen’s stale script unfolds more in the manner of a TV sitcom than a full-bodied movie.

Filmed mostly on location on the Universal Studio backlot, it’s a bedraggled comedy desperately searching for laughs and finding none on hand. The movie is as empty as something can be without actually creating a vacuum.