A post-holocaust generation has been divided into two groups: Approximately 1% of the population are “Sex Positives” – those whose libidos escaped unscathed after the Nuclear Kiss – and the other 99% are “Sex Negatives” – they want to make love, but the mere touch of another makes them violently ill.

By law, the former have to perform in front of the latter to give them the vicarious thrill of a sensation they are no longer capable of experiencing. The performers are not volunteers and enforcers flush out Sex Positives who are not performing. 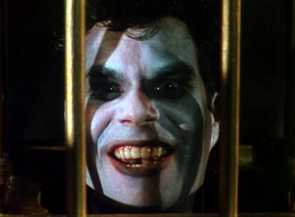 At the eponymous Café Flesh, the hard-core activity is amusingly hosted by the club’s delightfully sarcastic emcee Max Melodramatic (stand-up comic Andy Nichols) and accompanied by a vaguely punk soundtrack.