Author Cameron Crowe based Fast Times at Ridgemont High on his real-life observations when he returned to high school at the age of 22.

The resulting movie about life in a California High School was probably single-handedly responsible for popularising the expression “Totally awesome” and the term “Dude”. Put them all together and it’s like totally awesome, dude!

Sean Penn played the archetypal stoned surfer-dude (much imitated in 80s high school movies – a favourite genre of that decade).

Spicoli may have been bordering on illiterate, but he was so cool that he had pizza delivered to him in class – This apparently spawned an epidemic of US high school kids trying to emulate their hero (or perhaps that was wishful thinking on the part of Domino’s).

Standout scenes include Phoebe Cates removing her top in slow motion as she climbs from the pool (pert, very pert) while Judge Reinhold watches her through the window and jerks off in the bathroom, Phoebe Cates deep-throating a carrot in the cafeteria and . . . er . . . any other scene with Phoebe Cates in it.

There is also a great nude sex scene of 15- year old Stacy (a 20-year-old Jennifer Jason Leigh) losing her virginity in the Pool House. The remainder of the film is basically chock-full of pot smoking, adolescent sex, Pat Benatar hair-do’s, Cheap Trick songs, fast food and the ubiquitous Mall.

Fast Times is perhaps the ultimate teen movie of the 80s. The studio (Universal) hated it and pulled all advertising (and cancelled the East Coast release), but slowly, Fast Times found its audience, and kids who had never seen their lives rendered so sympathetically on the big screen began to flock to the movie. 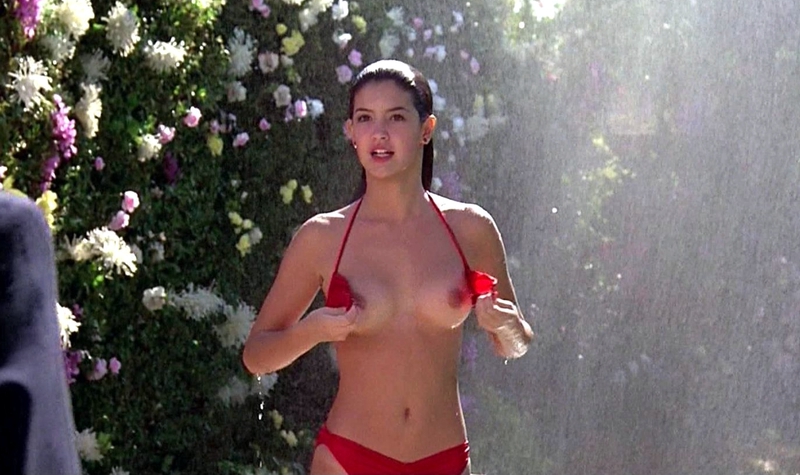 Today, the DNA of Fast Times snakes through modern film and television everywhere. Many of the young cast made their celluloid debut in this film and several went on to Hollywood stardom.

This film inspired a short-lived TV series, Fast Times, that was broadcast on the CBS network in 1986.

The TV theme was performed by Oingo Boingo.