Steven Spielberg’s dinosaur thriller grossed over $900 million worldwide, demonstrating once again the director’s uncanny insight into what the public – especially the young – will flock to.

What they find is a luscious isle populated by real-life dinosaurs recreated using DNA found in pieces of long-buried amber.

A perfect sanctuary, in theory, but because the dinosaur breeds they have “made” include the infamous Tyrannosaurus Rex (and some nasty, toothy creatures named velociraptors), it’s obvious that the whole scheme is going to end in tears – and screaming and dying.

Part monster movie and part disaster movie as the island is thrashed by a storm and the assembled characters find there is nowhere to hide from giant rampaging (and, one assumes, hungry) prehistoric creatures, Jurassic Park is packed with many thrills and jaw-dropping dino effects – and when we do finally meet the ass-kicking T. Rex it is in one of the movie’s fabulous set-pieces.

The imperilled adults and children are stranded in the broken-down ‘ride’ (jeeps on a track taking them through the park) as the storm hits, the electric fences malfunction and the scariest dinosaur of them all gets loose.

There are many other impressive moments, from the raptors in the kitchen to the T. Rex vs. raptor showdown. The extraordinarily lifelike dinosaurs were created by the Matsushita workshops.

There is a perception that all of the dinosaurs in the film are computer-generated, when, in reality, probably two-thirds of the work was puppetry. 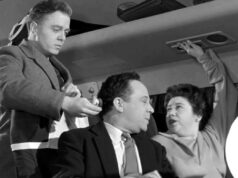 A black bounty hunter (Fred Williamson) and his sidekick (D'Urville Martin) ride into a small frightened frontier town out West in pursuit of an...

Vincent Price is on the rampage again - this time in 16th century Spain - in this marvellous horror tale based on Edgar Allen...

This drama about Glenn Tyler - a rebellious backwoods delinquent on parole, who ends up going to college to become a great writer - represents an...

After 20 years of marriage, feckless and domestically untidy Amy Preston (Yvonne Mitchell) finds she cannot compete with an attractive younger woman for the...

The best British television comedy of 1977 was not exactly written. Abigail's Party was the BBC's first full-length play where much of the dialogue was improvised. The...