This British female dance-pop vocal trio, comprising Siobhan Fahey, Keren Woodward and Sara Dallin, came on the scene just as MTV was becoming an influential force in the early 80s.

The three friends released a single (Aie a Mwana) on the independent Demon label in 1981. Their picture was spotted in the late style bible The Face by Fun Boy Three, who recruited them to sing backup vocals on their 1982 single T’Aint What You Do . . .

Fun Boy Three returned the favour on Really Saying Something giving Bananarama – whose name was a conflation of the Roxy Music song Pyjamarama and the Banana Splits television show – their first independent chart entry.

Although the trio all but stumbled into a career as recording artists, in September 1988 they entered the record books as the all-female group with the most ever British chart entries, and until the Spice Girls, Bananarama was the most successful girl band in Britain ever.

As with the inventors of “Girl Power”, their voices were rather unremarkable, but you got to choose which one you fancied; the dark one, the blonde one, or the slightly less blonde one.

The girls were often mocked for their passionless singing style (identical lines, no harmonies) and inability to play instruments but the hits kept on piling up, overseen by production team Swain and Jolley.

In 1986 they were given a fresh lease of life by teaming up with Stock/Aitken/Waterman, with whom they collaborated on smashes like I Heard A Rumour, as well as a revival of Venus.

In the UK, their biggest singles were Shy Boy, Na Na Hey Hey Kiss Him Goodbye, Cruel Summer, Robert De Niro’s Waiting, Venus (a remake of the classic hit by Shocking Blue), Love In The First Degree, I Want You Back and Help (The Beatles‘ song). All Top Ten Hits.

In the USA, they reached the Top Ten with Cruel Summer and I Heard A Rumour and made it to the #1 spot with their version of Venus.

Siobhan Fahey, who married Dave Stewart from the Eurythmics in August 1987, retired from the group in December of that year and formed Shakespear’s Sister. She was replaced by Jacquie O’Sullivan who quit in mid-1991 leaving Bananarama a duo.

In 1996 the group released Ultra Violet and gave the long-deceased equine creature a bloody good flogging. In 2005, after an eight-year absence, Bananarama entered the UK Top 40 for the 24th time. 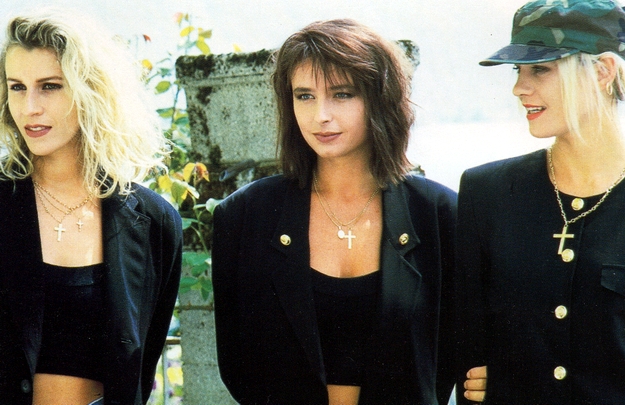