Band of Light was a blues-based group formed in October 1972 in Sydney (Australia) by Phil Key, with bassist Peter Roberts – both of whom had just left The La De Das.

Their distinctive blues-rock sound was built around the dual slide guitar work of Key and their other superb guitarist, Norm Roue, who had come from Sydney band Gutbucket.

Peter Roberts left after only three shows and was replaced by Ian Rilen, who was to become a fixture on the Australian rock scene in the 1970s and 1980s.

The band worked consistently on the Sydney and Melbourne pub circuit, eventually signing a recording contract with WEA in early 1973.

The group had immediate success when their first single, Destiny Song (July 1973), made the national Top 40, peaking at #18. 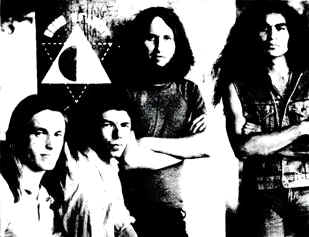 They followed this up with a successful debut LP, Total Union (August 1973) which made the national Top 20 album chart, peaking at #13. A third single, the non-album track Moonstruck was released in November, but it didn’t chart.

Band Of Light continued to be a popular live draw, but in mid-1974 – on the verge of recording their second album – Rilen, Roue and Buettel all left the band.

Phil called on bassist Bill Williams and drummer Dannie Davidson (ex-Tamam Shud) to replace Rilen and Buettel and cut the LP (The Archer) which was released later in the year.

Ray Vanderby (keyboards) and Eddie Hansen (lead guitar) were brought in to fill out the line-up for live dates, but neither the single The Archer (November), nor the album charted, and the group split in late 1974.

Phil Key died in 1985 of a congenital heart condition.

Originally perceived as a "people's band", regularly playing free concerts and festivals, Hawkwind were the first outfit to commit themselves completely and permanently to...

Neil Leslie Diamond was born on 24 January 1941, in Brooklyn, New York. For his sixteenth birthday, he was given a guitar and began...

The Fortunes began life as a Birmingham-Welsh vocal trio fronting The Cliftones - whose repertoire was based around easy-listening songs (including Maria from West Side Story). With the...

Despite initially forming in 1976 with a line up centred around vocalist Phil "Shonna" Rzonca and guitarist Dave Ryan, the Abrasive Wheels (the name...