The Bee Gees – the name is an acronym of “The Brothers Gibb” – are indisputably one of the most popular recording acts of all time. Maurice, Barry and Robin Gibb have sold more than 100 million records. The trio were so incredible in the 1960s in a psychedelic pop way and yet transitioned so comfortably into the disco mire.

With their bizarre falsetto warblings and their satin-trousered, open-shirted, blow-waved and bearded rugged looks The Bee Gees were a veritable 70s icon, and most people remember them for their work on three movies; Saturday Night Fever (1977), Sgt Peppers Lonely Hearts Club Band (1978) and Grease (1978) – whose title song they wrote.

As balladeers, The Bee Gees probably have no equal, and their recorded output has almost been surpassed by the sheer number of songs they have written for other artists (including Diana Ross and Barbra Streisand.) Only John Lennon and Paul McCartney have written more #1 singles on the American charts than Barry Gibb.

Listening to a number of their recordings from the sixties, The Bee Gees sound so completely utterly miserable that Joy Division and Nirvana sound positively gleeful by comparison. Nevertheless, the boys have been rightfully inducted into the Rock & Roll Hall of Fame and there probably isn’t a person on the face of the planet who doesn’t know at least one Bee Gees song. 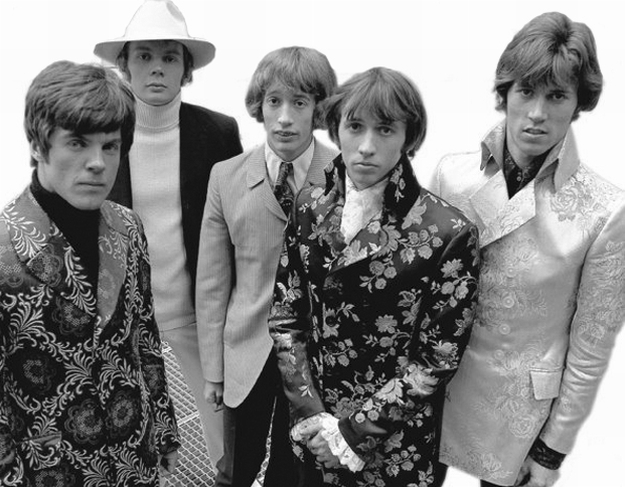 There has been much talk of The Bee Gees being Australian . . . They are not. Elder brother Barry and twins Maurice and Robin Gibb were born on the Isle of Man. They then moved with their family to Lancashire before emigrating to Australia in 1958. By 1967 they were back in the UK again.

So the brothers Gibb spent a grand total of eight or nine years in Australia. That makes them as Australian as Mel Gibson.

Before leaving Britain the brothers had already performed before an audience as The Rattlesnakes – usually at the Manchester Gaumont before Saturday’s picture shows.

In Australia, they secured a residency at Brisbane’s Beachcomber Hotel and signed a record deal with Australian label, Festival Records. Their debut single was Three Kisses of Love, but it was Wine and Women which gave them their first hit in 1965.

Switching to a label called Spin Records they recorded a series of minor Australian hits until Spicks and Specks became their first chart-topper in late 1966.

Early the following year the brothers decided they wanted to return to England. Despite their parents’ initial reluctance, Hughie Gibb posted copies of his sons’ records to numerous British management companies, including NEMS Enterprises – once owned by Brian Epstein, now controlled by Robert Stigwood.

Stigwood agreed to auditions The Bee Gees on their return, which led to a recording contract with Polydor. Their debut single for Polydor was New York Mining Disaster 1941, which reached #12 in Britain and #14 in the USA.

On 11 May 1967, during the group’s first Top Of The Pops appearance, Maurice met Lulu. They married quickly but the relationship didn’t last and Maurice was quick to admit that his drinking problem was a major factor in the failure, just as it was in the first Bee Gees split.

The trio drifted apart until briefly, in 1969, Maurice was left as the only Bee Gee.

The Bee Gees re-formed late in 1970 at Robin’s instigation. “If we hadn’t been related we would probably have never got back together,” he said.

The British were slow to support them this time, as reflected by their first single, Lonely Days, which stalled in the Top 40. The Americans, on the other hand, pushed it to #3.

From 1971 to 1974 The Bee Gees toured the world and released Top 20 singles on both sides of the Atlantic. But music was changing and the punters wanted to dance . . .

The Seventies were slowly being strangled by disco music and artists not previously associated with dance were cashing in, many losing their credibility along the way. Nonetheless, disco was booming and new acts were becoming big sellers as the beat dictated.

In August 1975, the brothers released Jive Talkin’, a fiery, stuttered dance track. It soared into the British Top Five and topped the US chart.

A year later, You Should Be Dancing smashed into the world’s charts, peaking at #5 in Britain and giving The Bee Gees their third #1 in America. The brothers had returned to the music business with a vengeance.

During February and March 1977 Robert Stigwood approached the Gibb brothers for songs to include in the soundtrack of a new film he was producing – a dance movie called Saturday Night Fever, starring John Travolta.

They provided Jive Talkin’, You Should Be Dancing, How Deep Is Your Love?, Stayin’ Alive, and Night Fever. They also wrote More Than A Woman for Tavares and If I Can’t Have You for Yvonne Elliman, both later million-sellers.

Saturday Night Fever premiered in December 1977, and thanks to The Bee Gee’s music (certainly not the movie’s storyline) disco music would never be the same. The soundtrack album sold over 30 million copies worldwide and both Stayin’ Alive and How Deep Is Your Love? topped the US charts for The Bee Gees.

When disco died the brothers turned their attention elsewhere, writing and producing Barbra Streisand’s 1980 album, Guilty, doing the same for Diana Ross in 1985 with Eaten Alive. In the process, they created chart-toppers for both artists – Streisand with Woman In Love and Ross with Chain Reaction.

The career of The Bee Gees as we know them effectively came to an end on 12 January 2003, with the tragic death of Maurice Gibb in a Miami hospital. Outwardly healthy – he led a paintballing team in his final weeks – Maurice suffered a heart attack following surgery for an intestinal condition. He was 53.

Robin Gibb passed away on 20 May 2012 from liver and kidney failure after a battle with colorectal cancer. He was 62.