The Breakfast Club’s drummer, Stephen Bray, helped write and produce several hits for his former college friend, Madonna, including True Blue and Into the Groove.

Madonna actually played drums in an early incarnation of the band around 1979. Yep, the band had the name long before the movie . . . 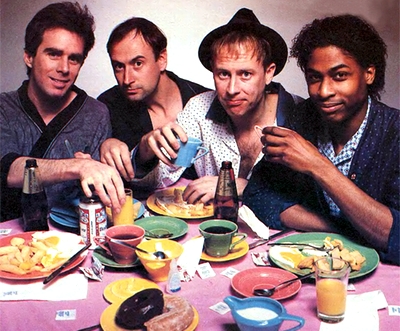 Guitarist brothers Dan and Eddie Gilroy had been fooling around with comedy-tinged music as The Acme Band before Bray came to New York from Detroit and added his funkier influences to the Gilroys’ artier roots.

With Steve providing the dance floor rhythms and Dan (whose voice sounded vaguely like Elvis Costello) and Eddie providing clever lyrics, The Breakfast Club released their self-titled debut album in 1987.

The video for their Top 10 hit single, Right On Track, received almost saturation MTV airplay but the group failed to follow the song up with anything substantial.

A second album was recorded but never released. Their last single was a cover of The Beatles‘ Drive My Car and the group called it a day in 1988.