It’s a tad unfair that Brinsley Schwarz became a global laughing stock after their infamous “Fillmore trip” of 1970. The ill-fated jaunt saw them pay for scores of drunken British music writers to fly to New York on a freebie and write about how rubbish they played. They deserved better.

Firstly, the band’s debut album was to be handed to journalists as they boarded the plane – except it wasn’t ready at the time, so no album. The plane was late getting in, there was no time to rehearse, and the band was pretty much thrown to the wolves. 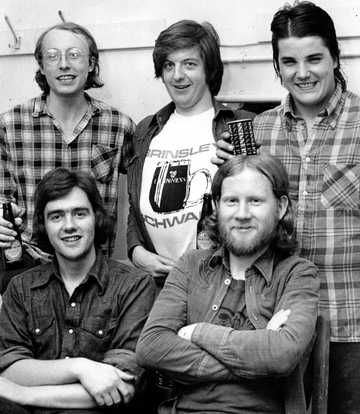 By this time, many writers were getting tired of the whole thing, and some didn’t even bother to see the show.

The band were still reeling from the New York fiasco when they first saw Eggs Over Easy performing in London and were immediately impressed.

Styling themselves on Americana heroes The Band (although Brinsley were actually nice middle-class kids from Northwood) they became the darlings of the thriving Pub Rock scene during the early 70s.

More than any other British band they managed to mould an identity out of various borrowed elements.

Nick Lowe and Schwarz had already spent several years in a group called Kippington Lodge, who released five singles on Parlophone during the mid-60s but achieved no real success. By 1969 Kippington Lodge had completely revamped its musical style – evolving into a folk-rock band with psychedelic pretensions – and changed its name to Brinsley Schwarz after the group’s lead guitarist.

With wry songs by Nick Lowe and with second guitarist Ian Gomm on board, Brinsley Schwarz became kings of the London pubs, where they often appeared under a pseudonym to keep the size of the crowds down.

Out of London, they toured constantly, headlining their own college shows or supporting bands such as Wings. But despite great songs like What’s So Funny ‘Bout Peace, Love and Understanding?, Surrender To The Rhythm and Cruel To Be Kind – and seven albums for United Artists – big hits eluded them.

After the band broke up – they played their final gig at the Marquee on 18 March 1975 – Schwarz and Andrews joined Graham Parker & The Rumour, while Nick Lowe became a pillar of the punk community as a producer (The Damned, Elvis Costello and The Pretenders) as well as a solo artist in his own right.

TRIVIA
Brinsley Schwarz have a short appearance in the film Stardust (1974). They appear backing The Thunderthighs doing Da Doo Ron Ron, which is listed on the soundtrack album as being by Dave Edmunds and The Electricians. For some reason, their contribution was not credited in the film.