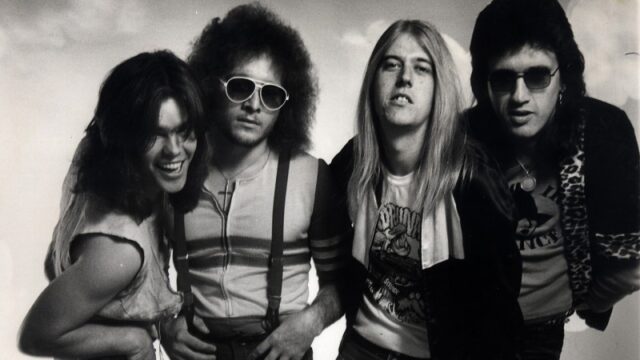 Sydney band Buffalo was one of Australia’s pioneering heavy rock outfits, and by virtue of the band’s appearance on the Vertigo label (they were the first Australian outfit signed to the collectable label), their sound became familiar to record collectors around the world.

Formed in 1971, Buffalo was one of the loudest and heaviest Aussie bands of the day alongside Billy Thorpe and The Aztecs and Blackfeather. Their debut album Dead Forever (1972) sold over 25,000 copies and the single Suzie Sunshine also sold well.

Second vocalist Alan Milano left and Jimmy Economou replaced Paul Balbi on drums for the second and third albums, Volcanic Rock (1973) and Only Want You For Your Body (1974).

Aside from absurdly macho song titles like I’m a Skirtlifter Not a Shirt Raiser, the band’s controversial album cover designs raised eyebrows; Dead Forever featured a blood-soaked face peering through the eye socket of a skull, Volcanic Rock boasted a graphic depiction of the female form as a menstruating volcano, and Only Want You For Your Body depicted an obese, screaming woman shackled to a torture rack (pictured).

In mid-1974, Buffalo recruited Norm Roue on slide guitar but, a few months later, original guitarist John Baxter was sacked from the band. Although the group recorded two more albums, they had lost one of their most valuable and distinctive assets and the spirit of the band simply dwindled.

By the time the album was released, both Roue and Taylor had left to be replaced by Chris Turner. Colin Stead joined Buffalo for a while as second guitarist, but the line-up proved incompatible.

A new single was released in August (Rollin’), but by the end of 1976 Wells had quit to form Rose Tattoo.

The album (and single, Sailor) were attempts at a more commercial sound but lacked the coherent direction of their previous releases. By the time the album came out in July 1977, Buffalo had broken up.

Belle & The Devotions began as just singer Kit Rolfe, who released two singles - Where Did Love Go Wrong? and Got To Let You Know - under the name in 1983. Laura James and Linda...

Adam & The Ants started off in early 1977, one of a dozen bands trying to keep up in the wake of The Sex Pistols What turned them into a top-of-the-bill band was the bondage routines -...

After recording two solo albums, former Deep Purple vocalist David Coverdale formed Whitesnake around 1977. In the glut of hard rock and heavy metal bands of the late 70s, their first albums got somewhat lost in the shuffle, although they...

Steve Harley (real name - Steven Nice) had worked as a journalist for a local newspaper in Colchester, Essex, before forming Cockney Rebel. The name came from an autobiographical poem ("The Cockney Rebel") he wrote...

The rock and roll magazine Trouser Press first appeared in 1974 in New York as a mimeographed fanzine by Ira Robbins, Karen Rose and Dave Schulps under the name Trans-Oceanic Trouser Press (a reference to...

There was no plot or story here, just a collection of lip-synched videos in colour from some of the bands that were part of the British Invasion in 1964. Bands such as The Animals (House Of...

By 1977, the New York punk scene had run out of steam. Into the vacuum charged a second generation of NYC bands - determined to sever all connections with rock tradition - who came to...