Winston Rodney was born in St Ann’s Parish, Jamaica, where civil rights leader Marcus Garvey was born in 1887, some 58 years previously. The experience of growing up among the working class in St Ann’s (also the birthplace of Bob Marley) would colour both men’s work.

Garvey would champion the “back to Africa” crusade through political activism. Rodney would fight injustice using song.

Marcus Garvey (1975) was the third album by Rodney a.k.a Burning Spear – a name borrowed from Kenyan rebel leader Jomo Kenyatta – but it translated as one of the most impressive introductions in reggae history. Despite being remixed by the record label for mass (otherwise known as white) consumption, which enraged Rodney, the album was a poignant blend of religious aspirations and cultural concerns that came across as both warning cry and peaceful meditation.

The cover illustration, depicting two angry young black warriors, set the mood even before Rodney opened with “Weeping and wailing and moaning/You’ve got yourself to blame, I tell you”. The political edge grew even sharper on Slavery Days as the singer remembered his ancestors’ shackles.

Burning Spear, the band, was a trio at the time and Rodney’s raw emotional delivery was intensified by the sweet sounds of bass vocalist Rupert Willington and tenor Delroy Hinds on such devotionals as Jordan River and Resting Place.

With further help from the Black Disciples, Rodney ensured that future generations would remember both Garvey and Burning Spear. 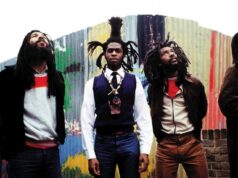 The Look formed in the Cambridgeshire cathedral city of Ely, gigging locally while shopping numerous tapes around record company A&R departments. Their collection of rejection...

The 'band with a thousand line-ups' was formed by two ex-Byrds (Chris Hillman and Gram Parsons) along with pedal steel guitarist "Sneaky" Pete Kleinow, bassist...

Concetta Rosa Maria Franconero was born in 1938 in Newark, New Jersey to Italian parents and began her career in music as a child...

Swedish export Roxette was more popular in the US than ABBA was. Whereas ABBA were purveyors of pure pop, Roxette specialised in big power...