Born in Lake County, Tennessee, on 9 April 1932, Carl Perkins began playing country music with his brothers Jay and Clayton for nearly a decade before he went to Memphis to sing for Sam Phillips.

He signed to Sun Records and recorded Blue Suede Shoes which hit #2 in the Billboard Hot 100 on release in 1956 and was later covered by Elvis Presley. It became the first million-selling single for Sun. 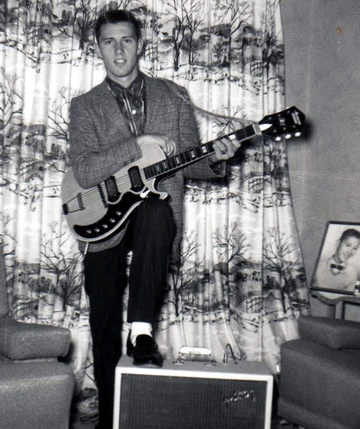 Carl was a much better hillbilly singer than Presley, but it is doubtful whether he would ever have achieved commercial success if he had stuck with that style.

“I stood backstage many times” recalled Perkins, “watching Elvis stir audiences with music with a beat. I was longing to throw away my ballads and join him”.

Perkins had another hit with Matchbox (later recorded by The Beatles) and was at the height of his career when tragedy struck in 1957.

He and his group were driving to New York to appear on Perry Como’s TV show when their driver fell asleep at the wheel about five miles from Dover, Delaware, causing Carl’s eight-seater Chrysler Imperial to hit the back of a pickup truck before plunging into the water.

The driver was killed and Carl and his elder brother Jay were seriously injured. Carl later considered that they had been saved from death by their car: “If it hadn’t been so long and built like a railroad car we would have been smashed”.

Although Perkins was back on the road in about a month, Jay never fully recovered and was later diagnosed with a brain tumour, from which he died in 1958. 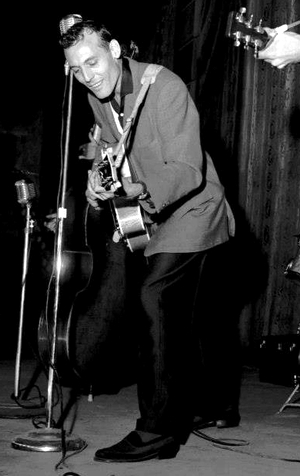 Carl Perkins continued to make excellent records on Sun – Boppin’ the Blues and Dixie Fried among others – although none recaptured the success of Blue Suede Shoes.

Most had the rough edges which make his records sound so good today but which were not acceptable back then. Perkins’ sales suffered as such artists as Ricky Nelson took his sound and watered it down.

After fulfilling his contract with Sun, Perkins finally left in January 1958 – along with Johnny Cash – to join Columbia Records. Sam Phillips thought that the singers possibly felt neglected at Sun.

Perkins did not achieve the success at Columbia that he must have hoped for with a major label.

He had a minor hit with Pointed Toe Shoes in 1959, but by this time he was developing a heavy drinking habit that had worsened after his brother died in October 1958.

Perkins stayed with Columbia, recording sporadically until 1963 when he signed with Decca.

By this time he was almost ready to give up show business – playing Las Vegas and Reno doing six 45-minute shows daily. He was a long way from his roots; a newspaper in Jackson reported him as thinking about opening a grocery store in the neighbourhood.

Around the time he signed with Decca he made his first tour of Europe, playing US military bases in France, Germany and Italy with brother Clayton, drummer Tony Moore and guitarist Fred Cuno.

In 1964, Perkins returned to Europe, this time to England where he received the wildest audience reception since 1956. 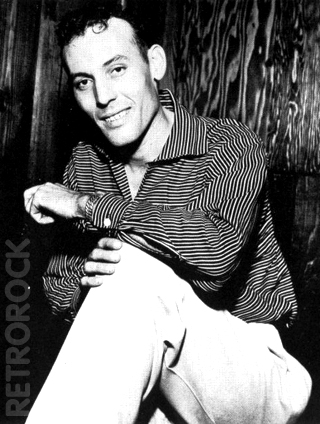 He toured with Chuck Berry and was visited by The Beatles – Both John Lennon and George Harrison had virtually learned how to play guitar from Perkins’ Dance Album and an unissued session remains of Carl jamming with The Beatles.

It was the first of many tours that the singer was to make in Europe and, importantly, it restored his self-respect after years of depressing club dates.

In 1966, Carl moved to Dollie Records, where his recordings drew heavily upon his experiences growing up in the Bible belt. Lake County Cotton Country and Country Boy’s Dream were classics of their kind but started to display the sentimentality that crept into some of his later work.

He went back to Columbia, scoring a country hit with Restless in 1968, but parted company with the label for a second time in 1973.

There followed a number of changes of label with Mercury releasing the My Kind Of Country album, Music Mill opting for his tougher neo-rockabilly style, and the British label, Jet, putting a lot of money into the rock ‘n’ roll album Ol’ Blue Suede’s Back. Perkins then began to release albums on his own Suede label. 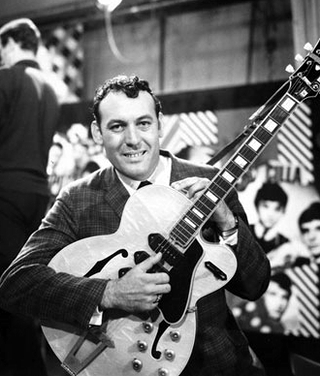 After 1967 he rejoined his old Sun Records buddy Johnny Cash, beat his drink problem and toured the world.

Carl also achieved some acclaim as a writer. He had earlier written So Wrong for Patsy Cline and followed this with hits for Johnny Cash, including Daddy Sang Bass.

With Cash, he wrote the music for Robert Redford’s movie Little Fauss and Big Halsy (1971). He became a born-again Christian and – after his amicable split with Cash in 1976 – he toured with a group that included his sons.

Perkins made many good records after leaving Sun in 1958, but he will be remembered mainly for those few tracks he cut in the old Sun Records studio between October 1954 and January 1958. It was one of those rare instances where everything came together, and no-one tried to trim off the rough edges.

Somewhere between the morbid poundings of Bauhaus and film director Peter Greenaway at his most baroque lay a chilly quartet called Cranes. Jim Shaw (drummer and composer)...

Californian surf band The Sunrays began life as The Renegades - and had also recorded as The Snowmen and The Rangers - before being...