Cutting Crew was formed in 1985 by English vocalist Nick Van Eede and Canadian guitarist Kevin Scott MacMichael. The duo made demos which led to a recording contract with Siren Records, and the addition of Colin Farley (bass) and Martin ‘Frosty’ Beedle (drums) in 1986.

The group never really capitalised on the runaway success of their first hit, (I Just) Died In Your Arms Tonight, which was a #1 in America and Canada (#4 in the UK)

On 31 December 2002, Kevin MacMichael died of lung cancer at the Queen Elizabeth II Health Sciences Centre in Halifax, Nova Scotia. He was just 51.

In 2005 Van Eede reformed the group with a completely new line-up and released the album, Grinning Souls. The new band toured in the UK and Europe.

English singer/songwriter Mika used (I Just) Died In Your Arms Tonight as the basis for his 2006 debut single, Relax, Take It Easy. The song was a chart hit around the world.

This Mortal Coil was essentially the creation of Ivo Watts-Russell, the co-owner of 4AD Records, a highly successful independent label based in Wandsworth, London. Watts-Russell used the umbrella name to collaborate with a number of musicians...

The 1960s pirate radio phenomenon was founded on a simple loophole and a cunning understanding of maritime law. If a ship was moored three or more miles off the British coastline, it was technically sailing in...

Extensive promotion directed at the "flower power" market, catchy psychedelic covers – nothing seemed to work for the Stones-loving Chocolate Watchband from San Jose in 1967 and 1968. They began their career with two singles on Uptown,... 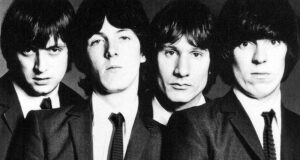 The Pleasers formed at the end of 1976 and spent most of the following year playing in and around London, using a regular Saturday night gig at The Stapleton Hall Tavern in Crouch End as...

Widely regarded as pioneers of the whole US hardcore movement, the four Rastafarians from Washington DC known as Bad Brains may well have been the most bad-ass group in this emerging scene but they were arguably...

Robert Lee "Chan" Romero was born on 7 July 1941 in Billings, Montana (USA). His father was of Spanish and Apache descent while his mother was a mix of Mexican, Cherokee and Irish. Both had...