In Britain, Radio 1 and Top of the Pops began in the Sixties, but by 1970 the Disc Jockeys (or DJ’s) had been elevated to stardom, and many were household names;

The son of a doctor from Guildford, Tony Blackburn was the first DJ to broadcast on Radio 1 when it launched in September 1967. He spent 17 years at the station and also presented Top of the Pops and was a weekly fixture on Noel’s House Party.

Prior to all that, he had broadcast on Radio Caroline and then Radio London.

After Radio 1, he was one of the launch presenters on Capital Gold. He has also hosted Radio 2’s Pick Of The Pops as well as regular bank holiday specials for the stations.

Brandon broke into broadcasting after reading an item in a newspaper about a couple of Disc Jockeys who were leaving Radio Luxembourg.

He scored himself an audition and landed up in the Grand Duchy of Luxembourg as a 208 DJ.

Later he joined a pirate radio station and from there went on to the BBC and Radio 2.

A key figure at Radio Luxembourg, he moved to Radio 1 in 1974, presenting a Sunday morning show and hosting the Top 20 chart programme. He and fellow DJ Dave Lee Travis released a parody cover version of U.S. hit Convoy.

Fired from Radio 1 in the Eighties, he went to work for Capital Gold.

Long-running Radio Luxembourg DJ with a passion for classic rock and soul music. Presented a popular Sunday show. Left the station in 1975 and joined Radio Victory in Portsmouth. Went on to do stints on radio in the Faroe Islands, Hong Kong and Ireland before returning to work in Luxembourg for Sunshine Radio and Radio Television Luxembourg. Retired from radio in 2007.

Edmonds, an ex-public schoolboy, the son of a headmaster, and a student teacher – turned down the chance of going to university for a broadcasting job with Radio Luxembourg in 1968.

With ten O-levels and four A-levels behind him, he entered the world of showbiz at the tender age of 19. Then he struck it lucky.

His chance to hit the big time came when he was picked to take over Kenney Everett’s Sunday morning show, a move which was to make him the youngest regular DJ on Radio One.

One of the great innovators. Kenny Everett (real name Maurice Cole) helped to establish the double-DJ show with Dave Cash on pirate station Radio London (‘Big L’). There Everett developed the production techniques and tape tomfoolery that he used throughout his career.

The timid Liverpudlian became electrifying behind the microphone and was envied for his genius as a tape editor, and for his assortment of Goon Show-inspired voices and characters.

Everett also proved vital in establishing Big L’s friendly relationship with The Beatles, travelling with them on their 1966 US tour.

Renowned for his risque remarks and unpredictable behaviour, Everett found himself suddenly out of a job in 1970, after moving to the BBC.

There was considerable fudging over the reasons for his on-air dismissal from Radio One.

The BBC maintained that it was not Everett’s on-air remarks about the transport minister’s wife (he claimed she had passed her driving test only because she had crammed a fiver into her examiner’s hand), but the fact that he had broken his promise not to “speak to the press on controversial broadcasting matters” which got him the boot.

Everett was a married man who later came out and who had wanted to be a priest before turning to television as a career.

Born in Melbourne, Australia, former-accountant Freeman landed himself a job as summer relief disc jockey on Radio Luxembourg. He made enough of an impression to get himself recruited to the BBC Light Programme as presenter of the Records Around Five show in 1960, where he first introduced his familiar signature tune, At the Sign of the Swinging Cymbal.

In 1961, Freeman took over Pick of the Pops from David Jacobs and successfully managed to relegate the musical content to second place with his ebullient presenting manner.

He also established himself as a regular fixture on TV’s Top of the Pops, having been appointed as one of the original four presenters in 1964. He appeared on film in Julien Temple’s Absolute Beginners (1986), in Dr Terror’s House Of Horrors (1965), and as a DJ in the 1968 Dirk Bogarde vehicle, Sebastian (1968).

Diddy David Hamilton started his career with the British Forces Broadcasting Service in Germany and when he came to England he became a television announcer in the North-East.

After a few years in Manchester as an announcer, he was chosen as Ken Dodd‘s straight man in the Doddy’s Magic Box series and later starred with Ken in a series called Funny You Should Say That.

He became best known for his weekday radio shows.

Henry joined pirate ship Radio Scotland after a stint at acting. Eventually, he joined the BBC and became known to millions.

Nicknamed ‘Kid’ because he was just 18 when he started broadcasting at Radio Luxembourg. Went on to present a Saturday morning show on Radio 1. Guest-hosted Top of the Pops, before going to work for US broadcaster CNN. Returned to the UK in the Eighties and worked for Capital Radio.

Known to listeners as Tony ‘Your Royal Ruler’ Prince, he went on to become programme director of Radio Luxembourg. Unlike many of his contemporaries, he missed out on a gig at Radio 1. Instead, he launched dance magazine Mixmag, which was later sold to Emap for £9 million.

Known for his lustrous hair and cheesy voice, his career soared after leaving Radio Luxembourg. Snapped up by Radio 1 where he hosted the breakfast show. Famously banned Frankie Goes To Hollywood‘s song Relax from his show in 1984 because he felt the lyrics were obscene. Also hosted Top of the Pops and Saturday Superstore on television. His play Oscar Wilde: The Musical was panned by critics and closed in the West End after one night in 2004.

Real name Michael Joseph Pasternak, Rosko launched his DJ career in the US Navy, joining Radio Caroline and Luxembourg before moving to the BBC in 1967.

He was famed for his pacy banter, outlandish dress sense and quirky sense of humour, and described himself as “the Emperor, the geeter with the heater, your leader, your groovy host from the West coast, here to clear up your skin and mess up your mind. It’ll make you feel good all over.”

His over-the-top style once prompted a newsreader to announce “Now here is the news – in English”.

Returned to the US in the 1970s before returning to Europe and Radio 1 in 1982. Also worked for Capital Gold and Virgin. 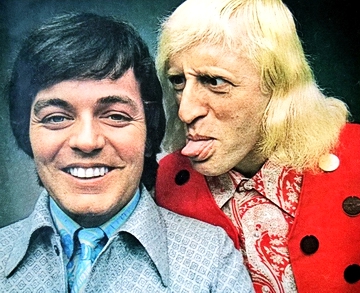 Jimmy left school at 14 to take an office job before becoming a coal-face worker in the mines.

An accident at the colliery put paid to mining and Jimmy decided to enter the world of showbiz.

As a disc jockey, he began his career by touring local dance halls with borrowed records and a record player.

From these beginnings, he went on to become arguably the most famous DJ on British radio and a ubiquitous television personality.

After his death in 2011, hundreds of allegations of sexual abuse were made against him, leading the police to believe that Savile had been a predatory sex offender – possibly one of Britain’s most prolific.

Ed “Stewpot” Stewart was supposed to have a secure job playing double bass in a jazz band in Hong Kong, but when he got there, there was no band, no job, no friends – he was stranded.

Luckily, he was stranded outside the office of a local radio station so he went in and asked for a job.

For the next four years, he was their sports commentator, film critic, disc jockey and tea-maker. When he got homesick, he did a radio commercial for an airline company in exchange for a flight home to England.

He later joined Radio London and became their chief DJ, eventually washing up at the BBC.

Birmingham-born Walker began his radio career on Swinging Radio England in 1966 (after failing an audition with Radio Luxembourg). After an 18-month stint, he switched ships to Radio Caroline before eventually joining the BBC.

Made many of Radio Luxembourg‘s jingles and stayed with the station as a presenter for ten years. Left in 1981 and went on to work on local radio and Capital Gold before moving into television and radio production.

A one-time bank clerk, Terry Wogan joined the BBC in the 1960s and was one of Radio 1‘s original team of presenters in 1967. His Radio 2 breakfast show in the 1970s and early 1980s gained him a cult following and established his distinctively witty, self-effacing presentational style.

Items like “Fighting the Flab” and “Wogan’s Winner” characterised the show, and his constant digs at Dallas ensured that the soap became a hit in the UK.

His TV career took off in 1979 when he began five years at the helm of Blankety Blank, and in 1980 he turned his hand to chat shows with What’s On Wogan?, a live Saturday tea-time programme.

Two years later the show metamorphosed into Wogan and was transmitted late on Saturday nights, before being promoted in 1985 to being a thrice-weekly early evening live event. Terry quickly became the television personality of the 1980s and was seldom off British screens.

Bobby Darin was born Walden Robert Cassotto on 14 May 1936, in the Bronx area of New York, and was raised by his mother...

Before Punk came along, Edinburgh art college students Alan Forbes and John Callis were R&B covers band The Knutsford Dominators. Their 1976 venture, The Rezillos, was...

Mud, Slik, Hello, The Glitter Band, The Rubettes, Scott Fitzgerald, Bob Kerr’s Whoopee band and The Silver Band - The stars were out for...

Jimmy Cliff left Jamaica, where he was the #1 local star, to try and make it in Britain in 1964. He spent five years playing...