The group began in Ilford, Essex, in the late 1960s as The Dooley Family, and comprised brothers Jim, John and Frank and their sisters Marie, Anne and Kathy.

In 1972 they were joined by friend Bob Walsh and moved to Worsley in Lancashire (without Marie, who was by now pregnant with her first child) to take advantage of live work on the lucrative northern club circuit.

They signed a recording deal with Alaska Records in 1974, and released their debut single, Hands Across the Sea (a song which was also entered into the Song for Europe contest by Olivia Newton-John).

In October 1975 they recorded a live album at the Rossia Hall in Moscow (The Dooley Family in Moscow) which went on to sell two million copies. In 1976, The Dooleys recorded the theme tune for an adult educational programme on BBC Television called On the Move and starring Bob Hoskins.

The Dooleys had their first hit with Think I’m Gonna Fall in Love With You, in the summer of 1977. 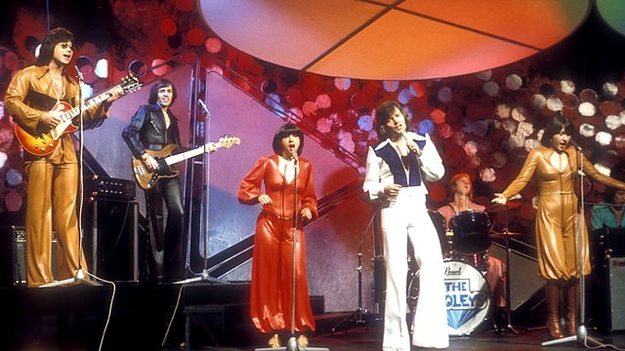 They were joined in early 1979 by the youngest member of the family, Helen, on keyboards and vocals, and a string of hits followed as the group travelled around Europe and the Far East as one of the busiest live acts around.

In 1980 they won the Gold Award at the Tokyo Music Festival with the song Body Language, which also went to #1 for seven weeks.

Despite their continuing international success, hits in their homeland began to dry up, though the act were still a major club draw. Anne and Bob left the group to start a family, and Helen also elected to leave at the same time for a new life in South Africa.

Anne was replaced by a former Irish Miss Universe, Vicki Roe (aka Valerie Roe), while Bob’s replacement on bass was Gaz Morgan.  Their musical director John “Dixie” Taggart took over on keyboards.

By the mid-80s, brothers John and Frank, and drummer Alan Bogan, all left the group. They were replaced by a succession of other musicians such as drummer Paul Dean, bassist Phil Brown and Keyboard player David John Hinson.

Although Jim and Kathy continued, John, Frank and Alan formed The New Dooleys about twelve months after leaving, but by 1992 it was all over, and both groups had retired from performing.

At the start of 1970, one of Britain's most promising new acts was The Faces - formed by three ex-members of The Small Faces together with Rod...

Lenny Kravitz was born on 26 May 1964 in New York City. His family ties - his Jewish father was a top television producer...