Kids today want designer names, the genuine thing. But in the 1950’s and 1960’s when money was in short supply, they were happy to buy double-sided cover versions of chart hits on the Embassy label, sold for 4/6d (22p) and marketed exclusively by Woolworth’s.

The label was initially an offshoot of Oriole who did a deal with the formidable high street chain to record cash-in cheapo covers in 1954. The Levy brothers ran Oriole from their pressing plant in the Buckinghamshire village of Aston Clinton.

As Woolworth’s had nearly 500 branches, these records could clock up considerable sales. Conventional wisdom says that if British cover versions of American hits were generally pretty naff, then the Embassy ones must have hit rock bottom, and many were truly dire.

But a number of releases were not just feeble copies, and many have stood the test of time. Artists who recorded for Embassy included Benny Lee and Pearl Carr, but most of the performers hid behind pseudonyms. 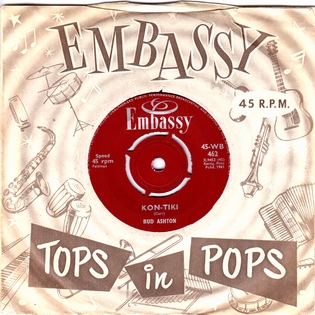 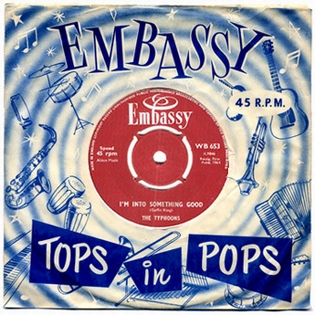 The session singers Embassy used had to be pretty tidy impersonators to cover the range of material in the chart. Jean Campbell did a decent job of Sailor, sounding like the very English Petula Clark, but flip the single and she sounds quite a lot like southern gal Connie Francis on Many Tears Ago. In fact, Jean was from Glasgow, had been a member of the Cyril Stapleton band, and later achieved pop culture immortality by singing “Now hands that do dishes can feel soft as your face with mild green Fairy liquid.”

By the time it folded in July 1965, Embassy had released some 1,200 songs recorded by around 150 different singers, each song given a strict thirty minutes recording time in their New Bond Street studio.

The budget soundalike record would become a big deal once more in 1968 with the first of Hallmark’s Top Of The Pops compilations, soon to be followed by Hot Hits, the majority of which featured perky young women best described as dolly birds on the cover.

Once again, these largely sold in Woolworths, and – unlike Embassy recordings – are now more collectable for their cheesecake artwork than their musical content.

Australian band The Town Criers formed in Melbourne in 1964. Their first single, a cover of The Kinks' The World Keeps Going Round, was...

As inner-city Britain rioted in 1981, The Specials had just topped the UK charts with the doomy and foreboding Ghost Town. And then they split up ....

The roots of The Blues Magoos were laid when Ralph Scala and Ronnie Gilbert met as members of the golf team at DeWitt Clinton...

The son of an impoverished Texas farming family, Jim Reeves was actually a very successful country music recording artist before he came to the...