The band set to work, rehearsing in Sandy’s Fulham flat in a sound-proofed room. When they finally hit the road, they deliberately set out to play concerts only, rather than small clubs with bad acoustics.

The decision was not born of any arrogant ‘super group’ attitude. Trevor and Sandy just believed that small clubs would not allow the sort of sound the group wanted to produce. 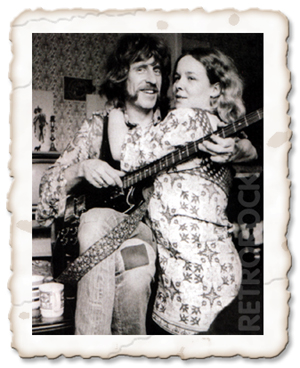 They became renowned for their enormous PA (with colossal super hi-fi WEM speakers) which faithfully reproduced their voices and acoustic guitars.

Capturing an enthralling mix of Fairport Convention-style folk rock and American country folk, it towers over their debut offering. Two of the songs were later remade for Denny’s The Northstar Grassman after she left the group.

Both Lucas and Gerry Conway had previously played with Eclection.

TRIVIA
‘Fotheringay’ is the name of a castle in Scotland where Mary Queen of Scots was beheaded.

Formed in Edinburgh in 1984, this pop group used guitar inflexions enthusiastically borrowed from the Buzzcocks. They were originally called Buba and The Shop...

When they first began, the thing that set Hello People apart from other bands was their whiteface makeup and use of mime onstage. Onstage, the...