Vincent Eugene Craddock was born in Norfolk, Virginia in 1935. After dropping out of South Norfolk High School at the age of 15, he lied about his age and joined the Navy. He served in Korea and was awarded two Distinguished Service Medals.

Returning to the US, he was involved in a severe motorcycle accident in 1953 while he was a naval dispatch rider. The accident shattered his left leg and confined him to a Navy hospital for 12 months, but he refused to have it amputated and it left him with a permanent limp and chronic pain for the rest of his life. 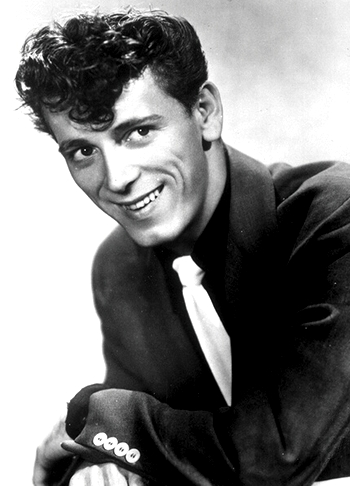 It was Vincent’s lame leg which instigated his singing career when the injury put an end to his promising future in the Navy.

In March 1956 he headed to Los Angeles where Capitol Records was launching a talent search, hoping to find a new Presley.

According to Gene, Be-Bop-A-Lula was written somewhere on a highway in New Mexico; while a buddy drove, he got drunk and decided to write a song about a “Little Lulu” comic he had bought at a truck stop.

He later cut a demo of it and Ken Nelson of Capitol signed him immediately to a long-term contract.

Legend has it that when Elvis Presley’s backing group first heard Be-Bop-A-Lula on the radio, its sex-crazed velvet purr was such that they were convinced The King had surreptitiously recorded it under an alias while Mrs Presley actually rang her son to congratulate him on his new hit.

By the end of the year, the song was a nationwide hit – a breathy shuffle punctuated by yelps of delight and a simple but striking guitar solo – and Gene Vincent and The Blue Caps were among the hottest groups in the country.

The Blue Caps were an excellent band of fiery young rockers – indeed, many rate them as the first real white rock group, with their two electric guitars, bass and drums line-up that was to become the standard format.

With Cliff Gallup and later Johnny Meeks on lead guitar, they defined the sound of rock’s classic three guitars and drums line-up as much as The Crickets and Chuck Berry.

Vincent maintained his popularity in the USA for three years. He and his band appeared in two films: The Girl Can’t Help It (1956), with Jayne Mansfield, and Hot Rod Gang (1958), in which the group performed three complete songs. 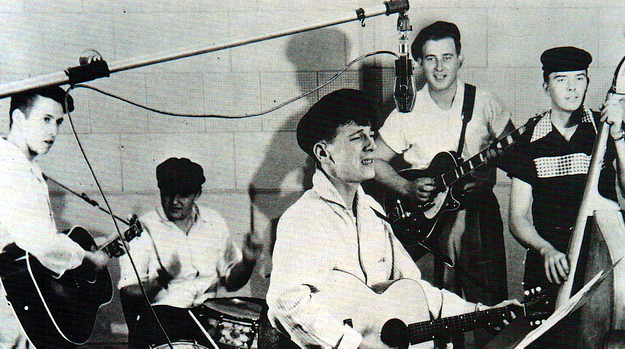 When his popularity began to wane at home in the late 50’s, Vincent found that audiences in Australia, New Zealand, Japan and Europe were hungry for genuine rockers. He fulfilled their expectations.

On stage, limping around in leather, all grease and sinister sensuality, with a vocal style not unlike Presley’s, Vincent established himself as a solid attraction around the world. He spent his last few years working mostly in England, where – despite steadily declining popularity – he was still revered in small pubs on the outskirts of London and in working men’s clubs in the North.

After further injury in a car crash on 17 April 1960 – which killed his friend Eddie Cochran – he gradually deteriorated.

Following a severe psychopathic seizure on Christmas Day 1963 – when he tried to stab manager Don Arden before clubbing his wife with his crutches – Vincent was forced to seek psychiatric help, the benefits of which sadly proved inadequate. 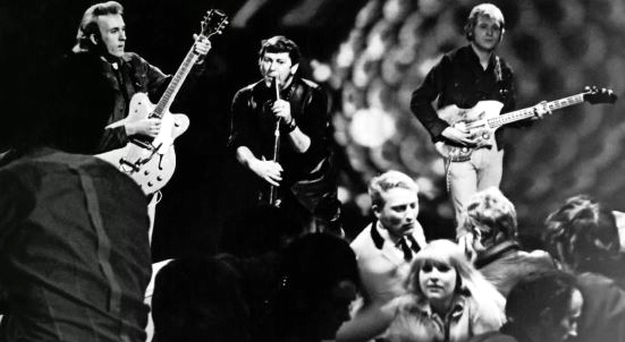 In 1970 Gene Vincent – by now a broke has-been with an addiction to drink and pills to numb the pain of his shattered leg and messed up life – was given one last throw of the dice.

Kama Sutra Records recognised Vincent’s capacity for country rock and signed him up for what would be his last two albums – If Only You Could See Me Today and The Day The World Turned Blue. They bombed, but the benefit of hindsight reveals them to be illuminating portraits of heartbreak and battered defiance.

Vincent eventually died from a ruptured stomach ulcer – the result of long-term alcoholism – on 12 October 1971 while visiting his family in California. 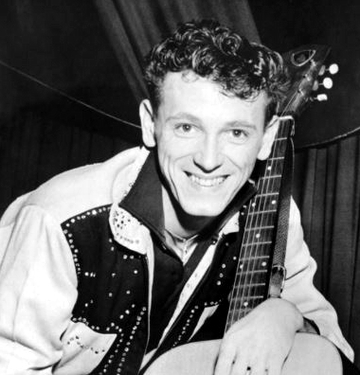 He reportedly died on his knees at his mother’s feet, screaming in agony through vomits of blood as his ulcer burst. His last words: “Mama, phone the ambulance now”.

He was pronounced dead at the nearby Inter-State Community Hospital. He was only 36.