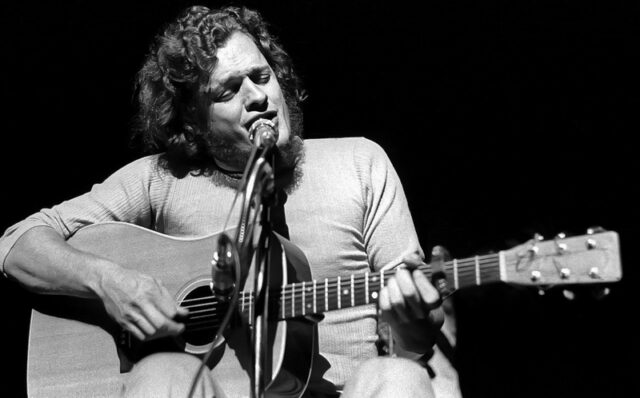 Harry Chapin was born on 7 December 1942 in Long Island, New York, and sang with the Brooklyn Boys’ Choir before forming a folk group – The Chapin Brothers – with younger brothers Tom and Steve that performed in Greenwich Village during the early 1960s.

He was the second son of Big Jim Chapin, a jazz drummer with Tommy Dorsey and Woody Herman.

After high school, Harry studied at the Air Force Academy, from which he dropped out, then at Cornell University, where he flunked out twice. He later worked in film production and even received an Oscar nomination for his 1969 boxing documentary, Legendary Champions.

He continued to write and perform his narrative songs in clubs, landing a recording contract in 1971 when labels were signing singer/songwriters like they were going out of style.

His long and slightly fatuous ballad Taxi became a staple of FM radio and he scored a #1 hit in 1974 with the sentimental Cat’s In The Cradle.

Prolific and earnest to a fault, Chapin was never a great tunesmith and tended to write songs with on-the-nose lyrics outfitted with clunky rhymes. Though he could be funny in concert, Chapin sometimes took himself too seriously, especially in his charity work.

He was an unstinting champion of the oppressed and devoted much of his life to combating poverty and world hunger. He raised millions of dollars for charity playing benefit concerts and supporting World Hunger Year (an educational and research organisation that he co-founded in 1974) while giving away his own money and tirelessly lobbying Congress for federal aid.

Chapin’s obsession with eliminating world hunger made him an effective ambassador and spokesperson for the disenfranchised, but songs such as The Shortest Story – a suicide-inducing tubular bell-ringing folk nightmare about an infant that dies of malnutrition – went too far.

It is surely one of the most horribly depressing songs in the history of pop music.

Chapin died in a traffic accident on the Long Island Expressway on 16 July 1981, as he was driving from his home in Huntington Bay, Long Island, to an appointment in Manhattan. He was 38.

Apparently, he was trying to change lanes when his blue 1975 Volkswagen Rabbit was hit from behind by a tractor-trailer. A spokesman at Nassau County Medical Center said Chapin died from a massive heart attack, but they were not sure if it happened before or after the collision. A gold pocket watch found on the body was the only initial means of identification.

Like any group of sensible young people going into business for themselves, the Boston-based band 'Til Tuesday had a plan. Singer/bassist Aimee Mann and androgynous guitarist Robert Holmes wrote it in the winter of 1983 and...

God bless The Sex Pistols. During their chaotic two-year existence, they introduced real musical anarchy to the world, yoking their working-class anger and disgust to a brutal roar that still inspires nascent punk bands. Looking back,...

Originally perceived as a "people's band", regularly playing free concerts and festivals, Hawkwind were the first outfit to commit themselves completely and permanently to science-fiction subject matter, with music swamped in spacey synthesizer sounds and...

Having started life in the early 1960s travelling the UK in a van as John Lee Hooker's backing band, by the mid-70s The Groundhogs had become a trio who supported The Rolling Stones and had...

Formed by Green Gartside and Tom Morley in the artsy, politicised milieu of Leeds University (Yorkshire) in 1977, with a name that combined Marxist namedrop (an Antonio Gramsci title roughly meaning "political writings") with Tutti-Frutti...

Founded in 1974 by Liverpudlian tenor-saxophonist Albie Donnelly and drummer Dave Irving, Supercharge soon built up a cult following in Liverpool. They then built a following on the British college circuit and released their first...