Janis Joplin – ‘Pearl’ to her friends – sang the blues like no other white woman before or since.

Born on 19 January 1943, Janis came from Port Arthur, Texas. At high school, she dressed differently and cared about different things and, as a result, had few friends that she could relate to.

Texas isn’t the place for outrageous people, and as Janis said, “they laughed me out of class, out of town and out of the state”. When she finished high school, she began singing in a little bar outside Austin, Texas, and eventually decided to drop out of college and head for San Francisco with her old friend, Chet Helms.

In 1966 she became a member of Big Brother and The Holding Company, and was a sensation at the Monterey Pop Festival in 1967. At 24 she was an overnight success.

But in September 1968, Janis Joplin announced she was leaving Big Brother and The Holding Company, explaining that she and the band weren’t “growing together anymore”.

She formed her own band called Full Tilt Boogie, but Janis was slipping – undone by heavy drug use. Only after a weak performance with the Kozmic Blues Band at the Woodstock Festival in 1969 did she recognise her own failings and vow to kick her heroin habit.

Janis was arrested in November 1969 following a performance in Tampa, Florida, during which she used offensive language while addressing a policeman in attendance at the concert.

Apparently, the cop had ordered the crowd to calm down and Joplin responded, “Don’t fuck with those people!” before finishing with, “Hey mister, what’re you so uptight about? Did you buy a five-dollar ticket?”.

She was released on a $500 bond and the charges were later dropped.

Spring 1970 saw Janis clean and rejuvenated, and in September she began recording her new album at Sunset Sound studios in LA.  But when her boyfriend, a former drug dealer, left town for a few days, Janis grew bored and began using heroin again.

Unknown to her, the last batch she procured was uncut, and America’s most popular white blues singer died of an accidental heroin overdose on 4 October 1970, in a room at the Landmark Hotel in Los Angeles. She was the same age as Jimi Hendrix who had died three weeks earlier – only 27.

She reportedly died with a broken nose, clutching $4.50 in her hand, in a room where no drugs were found.

As Janis had requested, she was cremated, her ashes scattered from a plane over the coastline of California’s Marin County. She had also earmarked $2,500 for two memorial gatherings for her friends in New York and in California.

Rights to royalties and her possessions were bequeathed in equal portions to her parents, Seth and Dorothy, and to younger siblings Michael and Laura.

Pearl (1971) was released four months after Joplin’s death and topped the American chart for nine weeks. And although she wasn’t around to complete it, the album remains her definitive work.

Starting with the Full Tilt Boogie assault of Move Over and continuing with the mournful Cry Baby, Joplin displays astonishing vocal versatility as she fills her words with tangible drama and passion.

Listening to A Woman Left Lonely it is hard not to draw comparisons with all-time greats like Bessie Smith.

In retrospect, the most moving number on the album doesn’t feature a single word sung by Joplin. She was found dead before she had added her vocals to Buried Alive In The Blues.

Before Janis, the female rock star simply did not exist. There were glamorous soul queens like Diana Ross, and poised folk artists like Joni Mitchell, and numerous pretty pop stars. But Rock & Roll remained exclusively a boys’ club. Janis broke the club rules.

Ultimately, Janis Joplin left behind a slim body of work but a powerful legacy. For the true measure of her influence look to Patti Smith, Alanis Morissette, Polly Harvey and The Pretenders‘ Chrissie Hynde, who was 18 when she saw Janis perform live in Ohio, and later remarked: “It was like watching a boxing match”. Such was the intensity of Janis Joplin’s short life.

Jim Seals and Dash Crofts formed their musical partnership in the late 50s when, as teenagers, they went out on the road with The Champs (of Tequila fame). While the pair earned their living playing Latin-tinged instrumental rock,...

The Amazing Rhythm Aces came together in Tennessee in 1972, with a sound mixing pop, country and blue-eyed soul. Their debut album, Stacked Deck (1975), resulted in two crossover country-rock hits, Third Rate Romance and Amazing Grace (Used to Be Her... 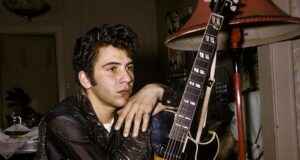 Ralph Stuart Emanuel Donner was born in Norwood Park, Chicago and sang in church as a child. He sang in local talent shows as a teen, and formed two of his own bands, The Rockin'...

Southern country rock guitar band The Outlaws hailed from Tampa, Florida and were born in seedy bars where the patrons cared more about the beer than the music. They built up their following in America by supporting...

Brian Epstein was born on 19 September 1934 in Rodney Street, Liverpool - an exclusive area well known for its concentration of doctors. The grandson of a Polish immigrant, Brian was the first of two...

Bob Geldof (ex-Boomtown Rats) was watching television in October 1984 when he saw the news reports on the famine crisis in Ethiopia. Driven to action, he used his contacts to get people together. And so Geldof...