During the early years of Australian Rock & Roll, the scene was almost entirely male-dominated. As the beat softened and the frantic momentum diminished during the early 1960s, the first female solo singers began to emerge.

By the age of 13, Patricia Amphlett had won a talent contest singing Surfer Joe and consequently became a regular at Sydney’s southern beaches surf club dances, singing with a band called The Statesmen. 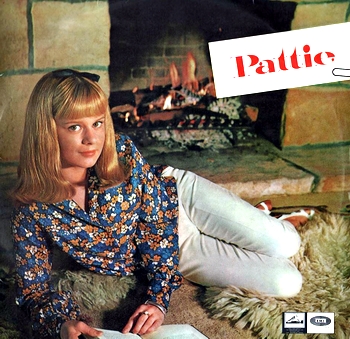 Patti was spotted by EMI’s in-house producer and A&R manager Joe Halford while singing at Bronte Surf Club and issued He’s My Blonde Headed Stompie Wompie Real Gone Surfer Boy (a song co-written by Halford and singer Jay Justin) which became an instant hit, peaking at #2 in Sydney in December 1963.

At 15, Little Pattie left Sydney Girl’s High School to concentrate on her singing career. She scored three more hit singles during 1964 and made regular television appearances on shows like Bandstand, Saturday Date and Sing, Sing, Sing.

By 1966, Pattie had moved upmarket and left the dances behind to make club and cabaret appearances, while continuing to release singles for EMI up until 1970.

In August 1966, Pattie (having dropped the ‘Little’) toured Vietnam to entertain Australian troops with Col Joye. Despite assurances of absolute safety, at the tender age of 17, she found herself being evacuated from the beach at Long Tan, and returned home a changed (and more politically mature) person.

In 1967, Pattie released her last Top 40 single, I’ll Eat My Hat, but continued to do concerts with Col Joye at Australian army training camps for the duration of Australia’s involvement in the Vietnam conflict.

In the 70s she released seven singles and in 1972 she played a leading role in the Australian Labor Party’s “It’s Time” campaign, which saw Gough Whitlam elected as the first Labor Prime Minister in 23 years.

Although Patricia Amphlett tried in later years to forge a career as an adult country and jazz singer, she fell foul of a common fate for child stars – the public refused to let her grow up.

In 1994, Pattie was awarded the Logistic and Support Medal for her services in entertaining Australian troops during the Vietnam conflict.