Their school friend Fred Loneragan joined as their singer, and they played their first show at Garibaldi’s in Darlinghurst, Sydney, in early 1980.

After adding bassist Nick ‘Nero’ Swan to the line-up, Machinations joined producer Lobby Loyde in the recording studio in late 1980. The result was their debut single Average Inadequacy and a four-track self-titled EP. The band were soon signed to Mushroom’s White Label. 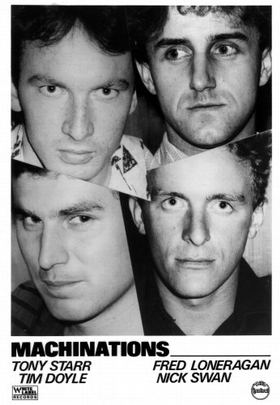 At the same time, Machinations released their first LP, Esteem, which broadened the band’s profile and appeal.

A second single, Jumping The Gap, fell just short of the Top 50, but Machinations found themselves as a support act for Joe Jackson’s Australian tour. By this time, Warren McLean had been recruited to replace the drum machine.

The next album – Big Music (July 1985) – would define the commercial and critical highpoint of the band’s career, providing three hit singles and featuring the slickest synth-pop sound of their career.

The first single, No Say In It, preceded the album by nine months and ended up being the band’s highest-charting single. My Heart’s On Fire (May 1985) reached a respectable #27 nationally, and the third single, You Got Me Going Again, also made the top 40.

The mini-album The Big Beat was released mid-1986 and featured dance remixes of several Machinations singles. 1986 also saw drummer Warren McLean depart to join the newly I’m Talking. Two more drummers followed in quick succession before Machinations found themselves back in the studio during 1987, recording the single Do To You, which reached #15 during October.

The new album Uptown (1988) was well-received, as was the accompanying single Intimacy.

Vocalist Fred Loneragan was involved in a hit-and-run accident while cycling in Sydney in 1989. He was left unconscious in a gutter for more than three hours with a broken neck and concussion until a passing motorist found him.

Fred was hospitalised for several months, during which time, various members left to pursue other projects.

1997 saw a reformation of Machinations for some live appearances. In February 2012, Machinations reformed and performed two shows at The Bridge Hotel in Rozelle (Sydney) and have continued to perform live infrequently since.