Jonathan and Andy Paley confounded fans and critics alike when they first appeared. The duo were hard to categorise us and faced a critical backlash because a lot of their press coverage was in magazines like 16 and Tiger Beat.

The fact that the two blonde brothers signed to Sire Records immediately after The Ramones and just before Talking Heads added to the confusion.

They had toured as Shaun Cassidy‘s opening act and had screaming pre-teens queueing around the block for autograph sessions, but they’d also played in Jonathan Richman’s Modern Lovers, logged time onstage at CBGB and counted among their consorts members of The Ramones and Patti Smith‘s band.

The brothers’ 1978 EP and album comprised, in fact, a pop-rock manifesto – an exhilarating musical statement crafted by two of the genre’s most eloquent defender-practitioners.

Andy got a set of drums at the age of six and by 11 he was playing in a band, The Satellite Six. When the family moved to Brooklyn, pre-teen Jonathan, inspired by Ricky Nelson on the Ozzie and Harriet TV show, got his first guitar.

As the Sixties morphed into the Seventies, Jonathan was playing the guitar with a greaser band called Diggit & the Doowops, and Andy was in Boston playing with Jonathan Richman and fronting the critically acclaimed Sidewinders.

In 1975, the brothers supported Richman at a gig at New York’s art-music space The Kitchen, Jonathan started Mong, one of the earliest groups to play CBGB, and the duo began cutting demos.

Their first product was the Sire EP, most of which was produced by engineer Jimmy Iovine in a New Jersey studio owned by jingle-composer Stefan Galfas and Four Seasons arranger Charlie Callelo.

All four tracks are stunners: the yearning, Ronettes/Beach Boys-flavoured Rendezvous; the Rascals-esque R&B of Hide and Seek; the harmonies and slashing guitar of Ecstasy and the undimmed sunshine pop of Come Out and Play – one of the genre’s finest moments.

Among the album’s many highlights are You’re the Best, featuring Jonathan’s falsetto, and Tell Me Tonight, which Andy conceived as “a sort of Philly soul record, like The Spinners‘ I’ll Be Around.

And the cover songs: Seymour Stein picked I Heard the Bluebirds Sing (originally done by The Browns of The Three Bells fame), and the brothers chose Mel Tillis’ Stick with Me Baby and Buddy Holly and Bob Montgomery’s rocker Down the Line.

Despite strong songs and sonic presentation, the LP drew scant airplay or sales. But the Paleys, undaunted, moved on to prepare material for a sophomore set.

Phil Spector approached the Paleys to record with him in Los Angeles. After several days rehearsing at Spector’s house, the brothers (Andy at upright piano, Jonathan on acoustic guitar) joined the full Wrecking Crew at Gold Star Studios. 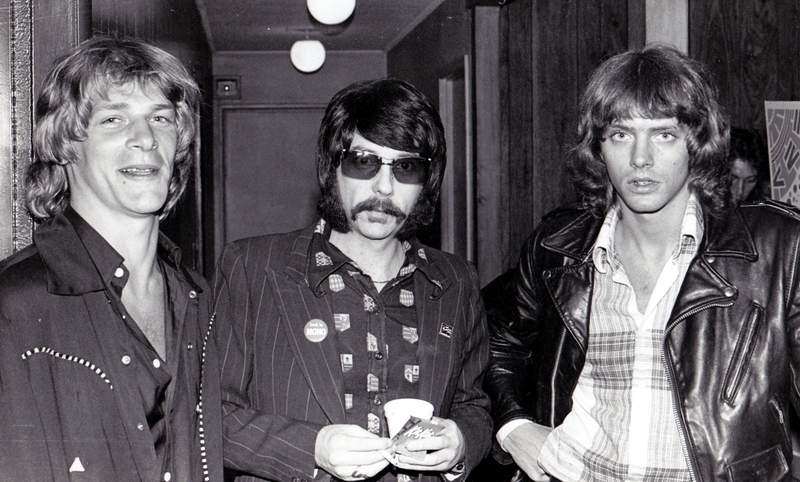 The result was a devilishly infectious rock ‘n’ roll version of Baby, Let’s Stick Together, which Spector had cut as a dirge-like ballad with Dion three years earlier.

Sadly, there never was a second album. Andy went on the road with Patti Smith‘s band and got into production work while Jonathan went off and sailed around the world.

The post-album years yielded no further Paley Brothers releases, but the pair continued recording, together and alone. Many of these superb tracks have since been made available on The Complete Paley Brothers Recordings.

Andy went on to work with Brian Wilson, Jerry Lee Lewis, Madonna and many others, and wrote songs and scores for SpongeBob Squarepants, The L Word and various films. Jonathan produced records and performed with the Nervous Eaters, Pink Cadillac and Harvey Sid Fisher.