Phil Collins was born in Chiswick in 1951. As a young man, his father had run away to sea but was ordered back by Collins’ grandfather, who insisted he went to work in the City for Sun Alliance Insurance.

His mother ran a toy store before helping to start a children’s talent agency. At the age of three, Phil was given his first drum. Two years later he got a drum set that fitted in a suitcase.

At the age of 12 (pictured at left), he sold his brother’s train set (he thought it was his to sell) for £10 and bought a proper drum kit.

The first band he truly loved was The Action, a North London mod band that played R&B covers. The first gig he saw was The Yardbirds – on the day Jeff Beck joined.

A child actor, at 14 he appeared in a crowd scene in A Hard Day’s Night, and by 19 he was playing percussion on George Harrison‘s The Art Of Dying. All Phil Collins wanted to do was to play music.

His first group, Flaming Youth, never got enough work and, in 1969, were finally killed off by having to perform their “arty” mini-opera Ark2 – a piece nobody liked or understood, at the few gigs they did get.

In the spring of 1970, in the back pages of Melody Maker, he came across an advert requesting a new drummer for Genesis.

He turned up at Peter Gabriel’s parents’ Surrey home to find “impossibly colourful gardens, a swimming pool and a piano on the patio”. This was not the Hounslow he was used to . . . 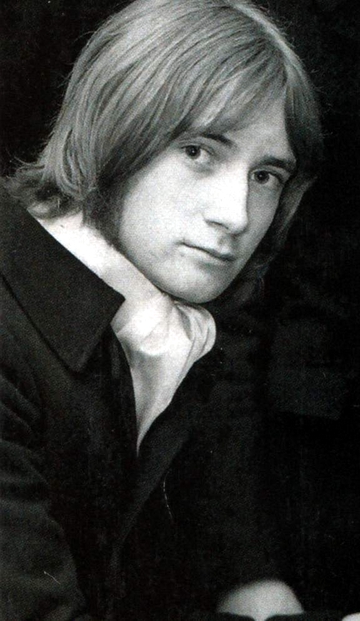 Fast forward to 1981 and In The Air Tonight is the first single from Collins’ debut solo album, Face Value. He had long taken over lead vocal chores for Genesis following the 1974 departure of Peter Gabriel, steering the group away from its nutty epic songs about hogweeds and talking lawnmowers towards a more mainstream pop sound.

While pressing his suits and throwing away Gabriel’s old praying mantis outfits, Collins discovered that his wife had left him. His outraged reaction resulted in his writing the bitter song In The Air Tonight, yet another example of the dire consequences of infidelity . . .

Face To Face was largely recorded by Collins on his home eight-track studio, with tracks transferred to a 24-track recorder in the studio to complete the songs, adding drums and so on.

After mastering the album (which he produced himself) in New York, Collins was dismayed to discover that it “sounded white” – and subsequent attempts in London didn’t improve matters. He eventually contacted Mike Reese in LA (who had mastered for the Jackson 5 and Earth, Wind and Fire) who did his thing on Face To Face and Collins finally got the sound he wanted.