“When I met you, you were seventeen, not just another teenage queen” – Shakespeare? Dylan? Lennon & McCartney?

While not strictly speaking ‘one-hit wonders‘, Racey had a very short stay at the toppermost of the poppermost with two notable hits (both from the one album), Lay Your Love On Me (1978) and Some Girls (1979).

After early success on the local pub circuit around Weston-super-Mare, Racey came to the attention of Mickie Most and were produced by Chinn and Chapman. 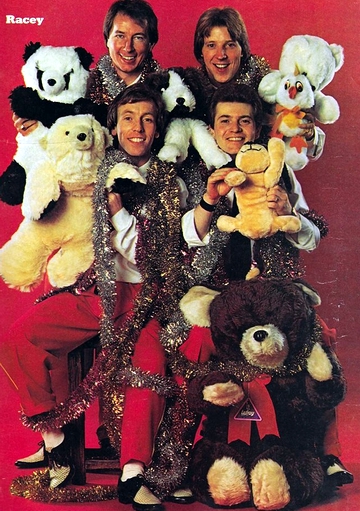 Their first single, Baby It’s You, was penned by Smokie members Chris Norman and Pete Spencer and released in 1978. It was followed by Lay Your Love on Me, the group’s first hit single, peaking at #3 in late 1978.

Third single, Some Girls, was actually written for Blondie (for whom Mike Chapman also produced) but was instead given to Racey and reached #2.

The band then parted company with Chinn and Chapman after their album, Smash and Grab (1979) was released and although they continued to play and tour they did not match their previous successes.

Other minor hits included Boy Oh Boy, Runaround Sue, and Such A Night.

Their album Smash And Grab also featured a track called Kitty, written by vocalist Richard Gower. It was later a mega-hit for Toni Basil, re-written as Mickey.

The band formally split in 1985, breaking into two separate groups – both named Racey – with one featuring Richard Gower and the other featuring Wilson, Fursdon and Miller.