Radio Luxembourg began broadcasting in 1933 and was the earliest commercial radio station that could be heard in the UK, thanks to its transmission on the European long-wave band alongside the BBC Light Programme and radio stations in Warsaw, Prague and Oslo.

In July 1951 the powers that be decided to switch Luxembourg (known officially as Radio Television Luxembourg or RTL) to the less powerful medium-wave (on 208 metres) which served Germany, the Netherlands and Belgium, plus the United Kingdom, where the signal was far from perfect. 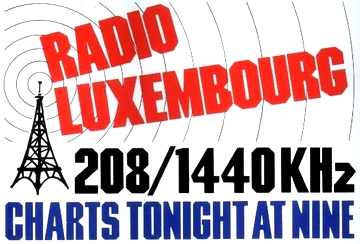 Despite broadcasting under the banner “Your Station of the Stars”, Luxembourg’s service to Britain was affected by the weather and by nighttime conditions over the UK, which led to the station broadcasting from 6.00 pm when reception was supposedly improved – especially if you lived in Scotland or the north of England.

With the launch of Radio 208 (as Radio Luxembourg was often referred to), the entertainment-starved listeners of Britain could enjoy such gems as adventure shows featuring “Pilot of the Future” Dan Dare (sponsored by Horlicks) and detective Perry Mason, entertainment from Leslie ‘Memory Man’ Welch, the quiz programme Chance of a Lifetime (with comedian Dick Emery) and – at 11.00 pm on a Monday night – Pete Murray hosting The Top 20 Show.

By 1955, the station was broadcasting from both Luxembourg and studios in London, and new “Disc Jockeys” were heard alongside Horace Batchelor’s legendary ‘Infra-Draw Method’ for winning money on the football pools – which turned the Bristol suburb of Keynsham (spelt K-E-Y-N-S-H-A-M) into a household name.

Often mistakenly referred to as a ‘Pirate’ radio station, Radio Luxembourg offered an English-speaking commercial service for more than 60 years and shaped the radio landscape for future commercial broadcasting in the UK.

The Teen and Twenty Disc Club (TTDC) was part of Jimmy Savile’s Decca-sponsored Radio Luxembourg show. The most famous member of the club – who Jimmy went to meet on behalf of the Club – was Elvis Presley.

In May 1962, the power of Radio Luxembourg was displayed in Britain when B Bumble and The Stingers took the instrumental Nut Rocker into the UK Top 10 without a single play on the national BBC radio.