I first came across The Riptides at the legendary Trade Union Club in Surry Hills, Sydney (Australia) in the early ’80s and was instantly besotted.

When I think back to the early ’80s and venues like Manning Bar at Sydney University and the Governor’s Pleasure in the Rocks, it’s this band that springs to mind.

Before moving to Sydney, The Riptides had earned a reputation as being Brisbane’s most popular live act.

Although by no means a punk outfit, their sound embodied the spirit and naiveté of the time and all of their songs contained catchy melodies. 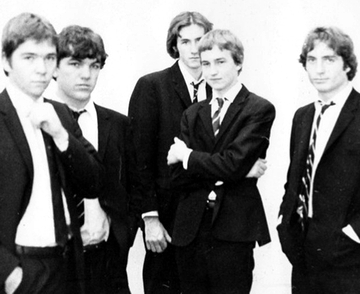 Headed for Sydney in June 1980, they became one of the biggest pub acts of the day and darlings of the inner city.

Dogged by line-up changes, their own naivety became replaced by cynicism about the whole industry.

As Mark Callaghan’s songwriting matured they became less power pop and more structured and sophisticated. But, plagued with record company problems and a lack of radio play, the band eventually split up.

Lead singer and songwriter, Mark Callaghan, found himself in GANGgajang.

In 1987, the band reunited at the Graphic Arts Club in inner-city Sydney for the first time in many years. Their Resurface tour followed with ex-Divinyls drummer JJ Harris sitting in, and a double live album of the same name was released to coincide with the live gigs.

Neil Chadwick joined as a permanent drummer and the Riptides toured once again before disbanding at the end of that year.

Mark Callaghan put together a new line-up of The Riptides in 2007 and in 2014 he supervised another compilation album, Tombs of Gold, which included unreleased material from the Swept Away sessions and four tracks from a later line-up.