Australian hard rockers Rose Tattoo made their live debut on New Years Eve 1976. In 1977 they recorded their debut single for Alberts with producers Vanda and Young.

Bad Boy For Love was released in October – by which stage Ian Rilen had left the band to form the infamous Australian punk outfit X.

The single peaked at #13 nationally (and #10 in Sydney) setting the Tatts up as a solid rock drawcard, competing with the likes of Cold Chisel, Dragon, The Angels and Kevin Borich Express on the (at the time) lucrative Oz pub circuit.

The group’s self-titled debut album was finished in November 1978 and remains one of the classic Australian rock albums. Heavy on the slide guitar, heavy on the aggression and heavy on the attitude, the album was brimming with street anthems like Rock ‘n’ Roll Outlaw, One Of The Boys and The Butcher And Fast Eddy.

Unfortunately, in the UK the Tatts were viewed as a punk band but still managed to sell out two gigs at the Marquee Club and appear at the Reading Festival. Most of 1981 was spent touring Europe and the UK. 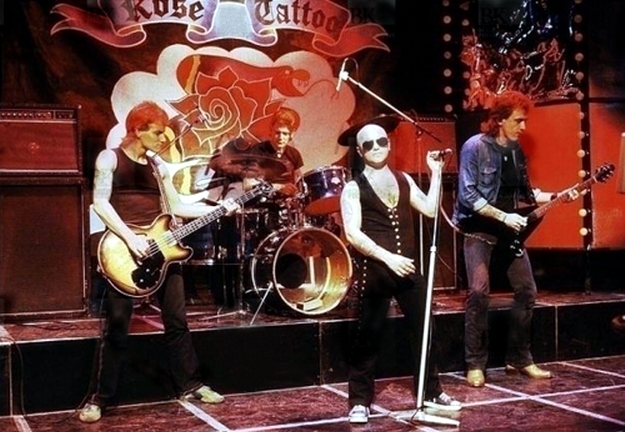 The band’s fourth single, Rock and Roll Is King, and their second album, Assault And Battery, reached #1 on the UK’s heavy metal chart. The band’s third album produced three singles, including the mighty We Can’t Be Beaten. The Tatts did not slow down, embarking on a three month US tour supporting Aerosmith and ZZ Top.

In 1985, Angry Anderson moved into movies and starred as Ironbar Bassey in Mad Max III – Beyond Thunderdome alongside Tina Turner and Mel Gibson.

The final Rose Tattoo album started out as an Anderson solo album and was a more polished recording. It produced four singles including the ballad Suddenly which was played during the wedding of Charlene Mitchell (Kylie Minogue) and Scott Robinson (Jason Donovan) in the popular soap opera Neighbours. The single reached #1 on the Australian charts in August 1987.

By the end of 1987, Rose Tattoo had broken up. When Guns N’ Roses toured Australia in 1993 they insisted that Rose Tattoo re-form and act as their support act for two gigs. Accordingly, the line-up of Anderson, Wells, Cocks, Leach and drummer Paul DeMarco (replacing the late Dallas Royal) re-formed.

UK-based folk rockers Eclection actually only had one British musician in their original line-up (drummer Gerry Conway) - the rest of the band came from Norway (Georg Hultgreen), Australia (Kerrilee Male and Trevor Lucas) and...

Born in Surrey, England, in 1944, Jeff Beck was already a guitar veteran of early 60s bands like Screaming Lord Sutch and The Nightshifts when he joined The Yardbirds to replace Eric Clapton, at the suggestion of future band member Jimmy...

Young mod revival group Back To Zero formed in early 1979 in North London where bespectacled guitarist Sam Burnett (17), drummer Andy Moore (16) and 17-year-old bassist "Mal" (Mark Malyon) were going to school together. They...

Grantham's Roy Taylor was a self-confessed "turnip wrangler from the Redneck Riviera" until he was inflamed by skiffle and touched by the transformative wand of the UK's first pop impresario, Larry Parnes. On his first night in the mogul's...

Status Quo began life as psychedelic/garage punk band The Spectres in the mid-60s. Their success was minimal until Francis Rossi and co changed their name to The Status Quo, having dabbled with the name Traffic Jam. Founder...