A pop sensation of the mid-1970s, Sherbet’s popularity was unrivalled in Australia. Their songs dealt with innocent, romantic allusions to pubescent sexual experience with lyrics like “Summer love is like no other love”.

Good looking and apparently well-behaved, the boys in Sherbet were ‘spunks’ in satin jackets to thousands and thousands of teenage fans.

Sherbet was an extremely hard-working and long-lasting band that dominated the Australian charts for almost a decade. Remarkably, they had 20 singles in the national Top 40 during the 1970s. Their years of success owed much to the smooth voice of Daryl Braithwaite and the songwriting talents of Garth Porter and Clive Shakespeare, and later Tony Mitchell.

Their run was phenomenal. 20 consecutive hit singles (plus another five for Daryl Braithwaite), 12 albums yielding 10 platinum and eight gold records, every possible Australian music award of the 70s and the honour of being not only the biggest domestic record sellers of all time but the first to sell a million dollars worth of records in Australia.

They reigned longer than the Bay City Rollers, David Essex or Skyhooks, which for a high profile pop band at the mercy of fickle kids is nothing short of a minor miracle. 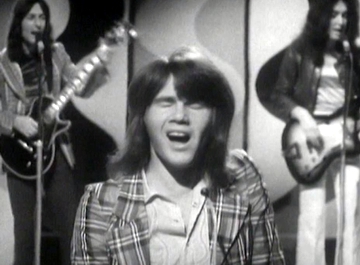 Formed by Shakespeare in 1969, the band’s first two years were inauspicious with constant changes in personnel. Garth Porter, a talented keyboard player and songwriter from New Zealand, joined late in 1970.

It was only at the beginning of 1972, when Tony Mitchell joined as bass guitarist, that Sherbet’s line-up stabilised, remaining unchanged for four years.

The songs lyrics may have been nonsensical  (“love is desire for something that you feel is wrong”) but they had captured an appealing sound in the studio, and Daryl’s voice showed a remarkable ability to move effortlessly in and out of falsetto.

More hits followed, including a Ted Mulry tune, You’re All Woman and another called You’ve Got The Gun which was the band’s first self-penned single.

Sherbet initially attracted strong interest in their hometown of Sydney but had to work hard to gain mass acceptance in Melbourne. They were the first Australian band to realise the potential worth of taking their music to the people on long, tedious national tours.

Lugging seven tons of equipment, they would set out in Greyhound coaches for up to three months, playing in town halls and School of Arts halls in hundreds of country towns. These were the days before a national circuit of large pub venues had been established.

Sherbet’s heavy touring schedule saw the band develop into an accomplished, professional live act. As a result, they won the Hoadley’s National Battle Of The Sounds in 1972 – the final year of the competition. Sherbet went on to win just about every award the Australian music industry could offer.

Musically, the band were a great deal more proficient than their image may have suggested. Their live sound was impressive and full-bodied and a real sense of entertainment prevailed on stage.

Riding high above the proceedings was easily the best drummer in the country, Alan Sandow with his (nearly always naked) torso awash with sweat. Sandow once estimated that Sherbet undertook 20 gruelling national tours, at least half of which were craftily timed and named to coincide with an album release. Tour/album operations were exactingly planned up to a year ahead.

Their concerts were intense and exciting spectacles; visual replicas of their Countdown image. All the tricks were dragged out – flashy lighting, smoke bombs and cheeky dialogue. To rural fans especially (unused to this kind of spectacle), it was like three Christmases at once. During their ‘Around Australia in 80 Days tour’ in 1976 they were mobbed by fans at airports and venues alike.

Exposure to a national television audience on Countdown vastly increased their popularity across the country. Sherbet avoided some of the excesses of glam, such as heavy make-up, but were partial to satin, velvet and custom-made bomber jackets.

The Sherbet success formula was deceptively simple. First, they presented a wholesome image that fostered romantic notions amongst pubescent girls. An image so safe that parents had little hesitation in shelling out the cash needed for records, concert tickets and paraphernalia.

In hand with this was a vigorous media strategy that kept the band constantly in the public eye but sufficiently elusive to maintain mystique and keep over-exposure at bay.

At the apex of this was charismatic, affable and sincere Daryl Braithwaite whose dedication to duty often had him putting in full eight hour days on a telephone connected in rapid succession to every radio station in the country.

“Musical and personal differences” caused the departure of Clive Shakespeare in 1976. He was replaced by Harvey James (pictured above right), whose boyish good looks only added to Sherbet’s appeal to its teenage audience.

That year also saw the release of the single Howzat. With its distinctive introductory bass line and its simple ‘love is a cricket match’ metaphor, it was a superbly crafted pop song that became their most memorable recording.

Howzat was Sherbet’s only record to chart overseas, reaching the Top 10 in England in 1976. While Australian acts in the past had recorded hits overseas, Howzat was the first single written and recorded locally to chart internationally. It was a significant achievement.

While remaining with Sherbet, Daryl Braithwaite (pictured below) pursued a flourishing solo career. He sang the title role in an Australian production of The Who‘s rock opera Tommy in 1973.

He also enjoyed chart success in Australia with middle of the road ballads like You’re My World, and was voted King of Pop every year between 1975 and 1977.

Despite his success as a solo recording artist, Daryl remained loyal to the band through thick and thin.

Sherbet were able to sustain longevity that is rare in Australian music, but they were unable to crack overseas markets in any lasting way. Known as Highway in the USA, the band had a couple of minor hits there.

Back in Australia at the end of the ’70s, they changed their name to The Sherbs, trying to move away from the saccharine pop image.

Despite their continuing prolific output and good material, the public had lost interest and the band suffered from being derisively labelled a teenybopper’s band.

Sherbet’s decline in popularity after a decade of exposure was a gradual slide rather than a sudden drop, allowing the band members to come to terms gradually with their loss of fame.

Years later, Garth Porter reflected on the years of hard work that kept Sherbet at the top for so long; “Always doing another album, hopefully another big hit. The prime concern was perpetuating it, rather than the integrity. Not that we were a band to be taken seriously, because we weren’t . . . As a musician, I discourage anyone from being trapped in a pop career. There’s only one way out – the big slide down”.

Braithwaite went on to record the platinum albums Edge (1988) and Rise (1990). Keyboard player and principal songwriter Garth Porter developed a career as a producer and composer, achieving outstanding success, especially in the field of Australian Country music.

Fresh out of college, John Randall (William Reynolds) tries to persuade his father into releasing rock and roll along with the other lame records...

Delaney Bramlett was born in Mississippi and Bonnie Lynn O’ Farrell in Illinois and their whirlwind romance resulted in the formation of a partnership...

The early and middle 60s are remembered by many as the time when The Beatles, Stones and big British beat took the world by storm. The charts...