Though they never received the recognition they deserved, Squire was one of the earliest and finest mod revival bands of the late 70’s.

Squire were able to transcend the limits of the genre with their high-quality pop which drew equal parts from punk spirit and the 1960’s.

Named because they rehearsed above a shop called Squires, this lot went to school with Paul Weller in Woking, Surrey and formed in Guildford not long after The Jam as a covers band consisting of Enzo Esposito (vocals/bass), Steve Baker (guitar) and Ross Di’Landa (drums).

In June 1978, songwriter/guitarist Anthony Meynell joined just prior to a high-profile gig opening for The Jam at the thousand-seater Guildford Civic Hall.

The addition of Meynell changed the band’s focus to producing original material and their biggest break came with the newly termed mod revival movement and their appearance on the legendary Mods Mayday ’79 album which featured three songs by the band.

Squire hadn’t been invited to play at the Bridge House but went along anyway just for the hell of it. The Little Roosters failed to show so Squire were given their spot.

One of their demos, Get Ready To Go, was also picked up as a single release by ROK Records, attracting airplay on John Peel‘s BBC Radio One show.

Ian Page of Secret Affair (one of Squire’s mod peers) had just started his own I-Spy label through Arista and signed the band on the merits of their appearance on Mods Mayday ’79.

The signing led to some personnel changes. First, Di’Landa was replaced by Anthony’s younger brother Kevin, then Baker quit without replacement.

In 1979, Squire released two wonderful singles for I-Spy: Walking Down the Kings Road (which was picked up by Radio One DJ Kid Jensen as his Record of the Week) and The Face of Youth Today.

Walking Down the Kings Road (with the sensational B-Side It’s A Mod Mod World) crept into the Top 75 singles chart. 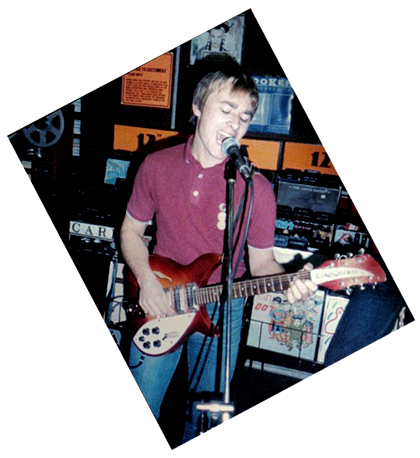 In 1980, Squire switched record labels, signing with another independent, Stage One Records.

The band’s first release on Stage One was My Mind Goes Round in Circles which, like its predecessors, barely made an impact on the charts.

Frustrated by a lack of success, the band essentially dissolved when the last original member, Esposito, left.

Anthony Meynell decided to give it another try when he started his own label, Hi-lo in 1981. The first release was the album Hits From 3000 Years Ago, a collection of old demos and live recordings from the original Squire line-up.

England ignored it but American and Australian power pop fans stumbled on to it and as word spread, it sold respectably, and deservedly so, the music here is pure pop, hook-filled, melodic and instantly endearing.

Meynell released a new single, a tentative foray into psychedelia called No Time Tomorrow, and another album of old demos and live tracks, Something Old, Something New, Something Borrowed, produced for his fan club members.

The first proper Squire album, Get Smart, was finally released late in 1983, with John Bicknell joining on bass.

They never made the breakthrough into the mainstream, but the album and its follow-up EP, September Gurls, (the title track was a cover of the Big Star classic) in 1984 became cult classics amongst power pop fans in America (Rodney Bingenheimer of KROQ was a big fan) and Australia.

Squire began preparation for their next album, Smash, but decided to call it quits before its completion.

Meynell set up in California for a time, launching his Hi-Lo label over there with help from Greg Shaw of Bomp! before returning to the UK and diving into the folk music scene, looking for a way to recapture his Englishness after immersing himself in American power pop for so long.

He performed live with a band called Cartoon Mayhem and recorded both solo and as Sugarplum. In recent years Meynell has dusted off the Squire name for live appearances in the UK and Europe (they are very big in Spain).

Chicken Shack formed in Kidderminster, Worcester in 1967. They were a heavily blues-based rock band featuring Stan Webb, who has often been compared to Freddie...

From their obscure acid punk beginnings in Oklahoma City in 1983, through to critical acclaim in the 90s and mainstream success in the new...