Susan Kay Quatro was born in Detroit on 3 June 1950 – the daughter of Detroit jazz bandleader Art Quatro (the family name “Quattrocchi” having been shortened to Quatro).

She played bongos for her dad’s jazz band at the age of 8, dropped out of school at 14 and started her professional career in the mid-Sixties when under the name Suzi Soul she became a TV Go-Go dancer. 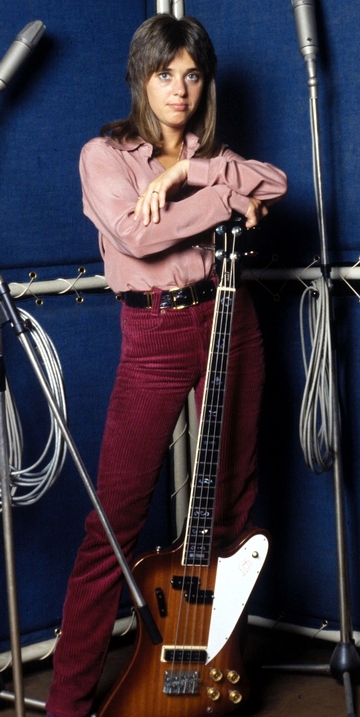 She later teamed up with two of her sisters to form The Pleasure Seekers, an outfit that remained together for five years and even, at one point, were flown to Guam to entertain US troops wounded in Vietnam.

The Pleasure Seekers’ first single, Never Thought You’d Leave Me b/w What A Way To Die, emerged late in 1966 and the group was also featured on an album, Best Of The Hideouts (1967), along with other Detroit celebrities The Under-dogs, The Yorkshires and The Henchmen.

A brief sojourn with her sister Patti’s band, Fanny – as well as her own band (Cradle) followed.

It was playing with Cradle in a Detroit club in 1971 that the then twenty-year-old Suzi was seen by the top British record producer Mickie Most whose many production successes included The Animals, Herman’s Hermits, Lulu, Jeff Beck, and Nancy Sinatra.

Most signed Suzi to his fledgeling RAK label, and her first professional appearances in the UK came in 1972 when she formed a band comprising guitarist Richard “Len” Tuckey (subsequently Suzi’s husband), Alistair McKenzie on keyboards (soon to be replaced by Mike Deacon) and Keith Hodge on drums, and set off on a UK tour supporting Slade. After her debut single, Rolling Stone, flopped (except in Portugal, where it reached #1), Mickie Most put Suzi in the hands of Mike Chapman and Nicky Chinn – who also wrote many hits for Mud, Smokie, and The Sweet.

The Chinnichap machine provided her with her first hit, Can The Can, in 1973 which made up for any disappointment by reaching #1 in the British charts within four weeks and remaining in the Top 30 for more than three months.

Suzi, dressed in leather jump-suit and wielding what seemed – given her tiny stature – a somewhat over-sized bass guitar, appeared on Top Of The Pops backed by her unshaven bruisers – Tuckey, McKenzie and Dave Neal, who had replaced Hodge on drums. All were guaranteed Top Twenty status by the bubblegum-boogie formula devised by Chinn and Chapman combined with Quatro and co’s bish-bash-bosh delivery and leather girl/boy packaging.

Her success also spread to Europe (especially Germany) where she scored a huge hit single, duetting with Smokie‘s Chris Norman on Stumblin’ In.

Ironically, though, for an American-born singer, Suzi failed to break in any major way in the US. Can The Can peaked at #56 in the Billboard charts, although she had some success with All Shook Up. The Stumblin’ In duet with Chris Norman, however, reached the Top 10 across the Atlantic. At a time when male popsters – Marc Bolan, The Sweet and the rest – were making fortunes out of simplistic rock played in lip-gloss, mascara, high-heeled boots and sparkly costumes, here was a girl coming on like a tomboy, being as unsavoury and obnoxious as The Rolling Stones, saying:

“I feel funny in dresses and skirts . . . Girls identify with me because I haven’t got big tits . . . The guys in my band don’t wear glitter – they’re real men”.

Black leather is sexy and it’s got original pose, perhaps, but in 1973 when the boys were like baby-faced girls and the girls were Olivia Newton-John or Lynsey de Paul, it was perfect.

Suzi released a succession of albums including Aggro-phobia, If You Knew Suzi, and the eponymous Suzi Quatro.

By the end of the Seventies, however, her chart career was on the wane and, perhaps wisely, Suzi moved more into the general entertainment area. From 1977 she appeared regularly as wayward, happy-go-lucky, would-be rock star Leather Tuscadero on the US TV series Happy Days (pictured) and also put in appearances as Dennis Waterman’s singer girlfriend in the English crime/comedy series Minder, as a mentally disturbed ex-MI5 operative in Dempsey and Makepeace and as a nurse in the comedy Absolutely Fabulous.

Suzi starred in the West End revival of the musical Annie Get Your Gun – a far cry from her days as a raunchy female rock star – and co-wrote and produced her own show, Tallulah Who?, about the life of American silent movie star Tallulah Bankhead, as well as appearing in other UK TV shows. Suzi also enjoyed a successful career as a radio presenter in the UK.

She married German concert promoter Rainer Haas in 1993, having divorced Len Tuckey in 1992.

In 2011 Suzi reunited with producer Mike Chapman for the album In The Spotlight, which was as close to a true “return to form” as anyone could ever hope for.

In 2017, Quatro released her sixteenth studio album backed by Andy Scott from Sweet on guitar and Don Powell from Slade on drums.

“You can have class and you can have excitement – but you can’t have them both together”.
Suzi Quatro. 1983