Home Artists - L to Z Artists - T They Might Be Giants 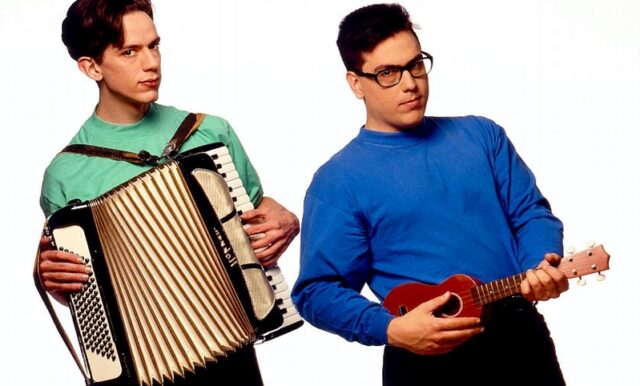 This Brooklyn-based duo, comprising John Flansburgh and John Linnell, gave a refreshing new twist to pop music. Their lyrics – which were usually funny and offbeat – were accompanied by Flansburgh’s guitar and Linnell’s accordion, giving their songs a truly unique sound.

The two Johns grew up in Lincoln, Massachusetts, but parted company after high school – Flansburgh to study art and Linnell to pursue music. Several years later, in a remarkable coincidence, they both moved to Brooklyn, New York – to the same apartment building on the same day.

The duo released their nineteen-track self-titled debut album in 1986, which became a college radio hit. The video for Don’t Let’s Start, filmed in the New York State Pavilion built for the 1964 New York World’s Fair in Queens, also became a hit on MTV, earning them a broader following.

Lincoln (1989) was every bit as quirky and eccentric as its predecessor, and contained the stand-out tracks Ana Ng and Kiss Me, Son of God.

Best known in the UK for Birdhouse In Your Soul – from their major label debut, Flood (1990) – and more recently Boss Of Me (2001) –  the theme tune from the magnificent TV show Malcolm In The Middle – much of what they were singing about remains unclear (Doctor Worm? Cyclops Rock?).

Full of puns, wisecracks and thesaurus-dependent lyrics, They Might Be Giants’s music was always entertaining. Quite obviously a big influence on Toronto band, Barenaked Ladies.

One of the better British progressive bands of the early 1970s, The Strawbs differed from their more successful compatriots (The Moody Blues, King Crimson, Pink Floyd etc)...

Derek and The Dominos

An almost fictitious group ended up making a double vinyl album that, though it bombed at the time, has since been re-evaluated as a...

Percy Sledge was born in Leighton, Alabama, in November 1941 and was working as a hospital orderly in 1965 when his former music teacher...

Kids In The Kitchen

Melbourne band Kids In The Kitchen reached #10 on the Australian national charts with their debut single, Change In Mood, in November 1983. A second single, Bitter Desire (May 1984),...

The Climax Blues Band (originally The Climax Chicago Blues Band) was formed in late 1968 in Stafford, England. The original members were multi-talented and forever...