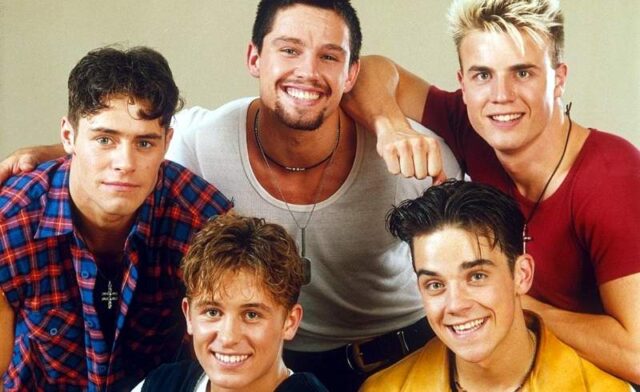 As the most popular teen pop sensation in Britain since the 1960s, Take That ruled the UK charts during the first half of the 90s.

In strict commercial terms, the band sold more records than any English act since The Beatles, though the cultural and musical importance was significantly less substantial.

Their boyish good looks guaranteed them a significant portion of the teenybopper audience, but they were also able to make inroads in the adult audience via Gary Barlow’s melodic, sensitive ballads.

Barlow was always the central figure of Take That, and as the lead vocalist and songwriter for the band, he determined their musical direction.

As a child, Barlow was already a gifted musician and, by the age of 14, he was playing organ in Ken Dodd‘s supporting band. One of his first original compositions, Let’s Pray For Christmas, was a finalist in a Christmas song competition on the BBC television show, Pebble Mill.

In his late teens, he came in contact with Mark Owen and Robbie Williams, two other young musicians that came from middle-class backgrounds. Williams’ father was a comedian and his mother was a singer, and before the formation of Take That, he had briefly appeared in the BBC soap opera, Brookside. Owen had previously auditioned and failed for Manchester United.

The trio formed The Cutest Rush, which had a short-lived career, but record producer/manager Nigel Martin Smith – who had the intention of putting together a British version of New Kids On The Block – approached the trio, who agreed, along with Jason Orange and Howard Donald (two former members of a break-dancing troupe called Street Beat) to become Take That in 1990.

After a few brief tours through gay nightclubs, Take That released their debut single, Do What U Like, on their independent Dance UK label in July 1991.

The single became a minor sensation, primarily because the video was quite suggestive and featured the band’s bare bums.

The single caused enough uproar for RCA Records to sign the group in Autumn 1991. Their first single for the label, Promises, scraped into the Top 40 by the end of the year.

In early 1992 Take That underwent a “Safe Sex” club tour to support their third single, Once You’ve Tasted Love, but the record only reached #47. The band didn’t break into the big-time until that summer when their cover of a Tavares song, It Only Takes A Minute reached #7.

Following the single’s success, Take That became a British media sensation, which set the stage for their debut album, Take That And Party, to debut at #5 upon its release. Within a month, the single A Million Love Songs reached the Top 10.

At the end of the year, the group took home no less than seven awards at the Smash Hits Awards, and their debut album continued to climb the charts, peaking at #2.

Early in 1993 the group’s #3 cover of Barry Manilow‘s Could It Be Magic? won a Brit Award for Best British single. Shortly afterwards, Why Can’t I Wake Up With You? reached #2.

Pray, the first single from their forthcoming second album entered the charts at #1, and that Autumn, Relight My Fire (which featured a cameo from Lulu), reached #1 also. Pray picked up Best Single and Best Video at the 1994 Brit Awards and brought Barlow a coveted Ivor Novello award for songwriting.

Everything Changes, the band’s second album, entered the charts at #1 upon its October release. Throughout the end of 1993 and 1994, Everything Changes yielded hit singles, with the majority of the releases also making their way to #1.

For nearly five years the group’s popularity was unsurpassed in Britain, as they racked up a total of seven #1 hits. By the middle of the decade, though, pop music tastes in Britain were changing, and shifting toward the classic guitar-pop sounds of BritPop bands like Blur and Oasis, who were able to appeal to both the indie-rock and teen-pop audience.

The members of Take That were also entering their mid-’20s and becoming disenchanted with each other. The first single from the forthcoming third album, Back for Good, was more substantive than any of their previous singles and earned them good reviews from all quarters of the press.

But the single suggested that Gary Barlow was beginning to distance himself from the band – and he wasn’t the only member to act in such a manner; Robbie Williams was becoming known as the “wild” member and was alienating himself from the rest of the group.

Nobody Else, the band’s third album, was a number one hit upon its spring release, but Robbie was noticeably quiet on the record. During the summer of 1995, it became evident that Williams was getting ready to breakaway from Take That.

He began tagging along after Oasis, who were notorious for their drug and alcohol intake, and Williams became the target of a number of tabloid reports of his bad behaviour, all the time bragging to the music press that he was working on solo material that sounded like Oasis.

It surprised nobody when Williams left Take That in July 1995, announcing that he was working on a solo album. Following his departure, the group immediately removed his name and likeness from all promotional and commercial material. His face didn’t even appear on the cover of the American release of Nobody Else.

Take That announced they had broken up on 13 February 1996 (ironically Robbie Williams’ 22nd birthday). Following the press release, they released a greatest hits collection, with their final single – a cover of The Bee Gees‘ How Deep Is Your Love? – entering the charts at #1.

It is hard to believe in retrospect, but The Stone Roses' eponymous debut album - now often cited as "the greatest British debut of all time" - slipped out without too much fanfare. Sure, the hipper...

Bob Geldof (ex-Boomtown Rats) was watching television in October 1984 when he saw the news reports on the famine crisis in Ethiopia. Driven to action, he used his contacts to get people together. And so Geldof...

Orchestral Manoeuvres In The Dark (OMD)

In 1978, Andy McCluskey and Paul Humphreys - two strait-laced kids from the Wirral - hosted an evening they considered to be a self-indulgent experiment in anti-music at a club in Liverpool, England. They called the...

This Brisbane-based Australian combo initially plied their wares on the club and discotheque circuit, mainly performing cover versions of the Top 40 hits of the day. They did, however, release two swinging pop singles for...

The Clones were very popular in Sydney, Australia in the late seventies/early eighties but only ever released one single - Tired Of Hiding b/w Happy I'm With Her - on RCA (through a local distribution company called Piranha Brothers). Tired...

Bobby Vee was born Robert Thomas Velline on 30 April 1943 in Fargo, North Dakota. As a teenager, he was obsessed with Buddy Holly. When it was announced that Holly and The Crickets were due to perform in...

Originally called The Bottlegarden, The Bluetones formed in Hounslow, London in 1994. In 1995, they released two singles, Are You Blue or Are You Blind? and Bluetonic, which received positive reviews in the British music weeklies...